At least 1,856 Common Murres, 548 Cassin’s Auklets, and 176 Arctic Loons died during the spill. The oil spill came during the non-breeding season when Common Murres float in the sea making them more susceptible in a oil spill. The oil continued to leak from the vessel over a two-week period. The stern area of the ship later sunk with 365,500 gallons of bunker fuel that reportedly leaked for several years following the incident.

An IBRRC response team helped care for the oiled birds. During this spill net-bottom caging for seabirds was conceived by IBRRC Director, Jay Holcomb. This caging allowed birds to be treated without developing major keel sores that was so evident in early oil spill responses.

Common Murres have a penguin-like appearance. They use wings to dive under water for cod and herring. Murres are extremely sensitive to oil spills as these birds spend most of the non-breedding season at sea. Major oil spills along central California coast have had a significant impact on their populations. 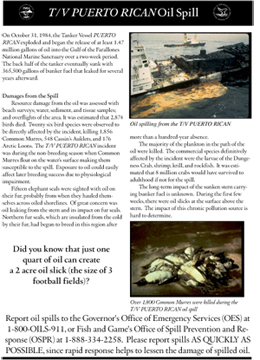