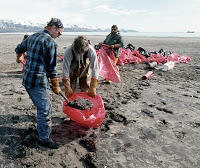 Time Magazine has a story worth reading on the 20th anniversary of the Exxon Valdez oil spill. The piece chronicles scientists studying the remnants of the 11 million gallon spill in the Prince William Sound:

…Here, on Death Marsh, Mandy Lindberg, a scientist with the National Oceanic and Atmospheric Administration (NOAA) in Alaska’s Auke Bay, turns over a shovel of sand and broken rock to reveal a glistening pool of brackish oil. The crude can be chemically typed to the Exxon Valdez, and more oil can be found beneath the beach at Death Marsh and at a number of islands around the Sound. “I wouldn’t have possibly believed the oil would last this long,” says Lindberg. “Studying the spill has been a great learning experience, but if we had known in the years after the spill what we know now, we would have been looking for oil much earlier.”