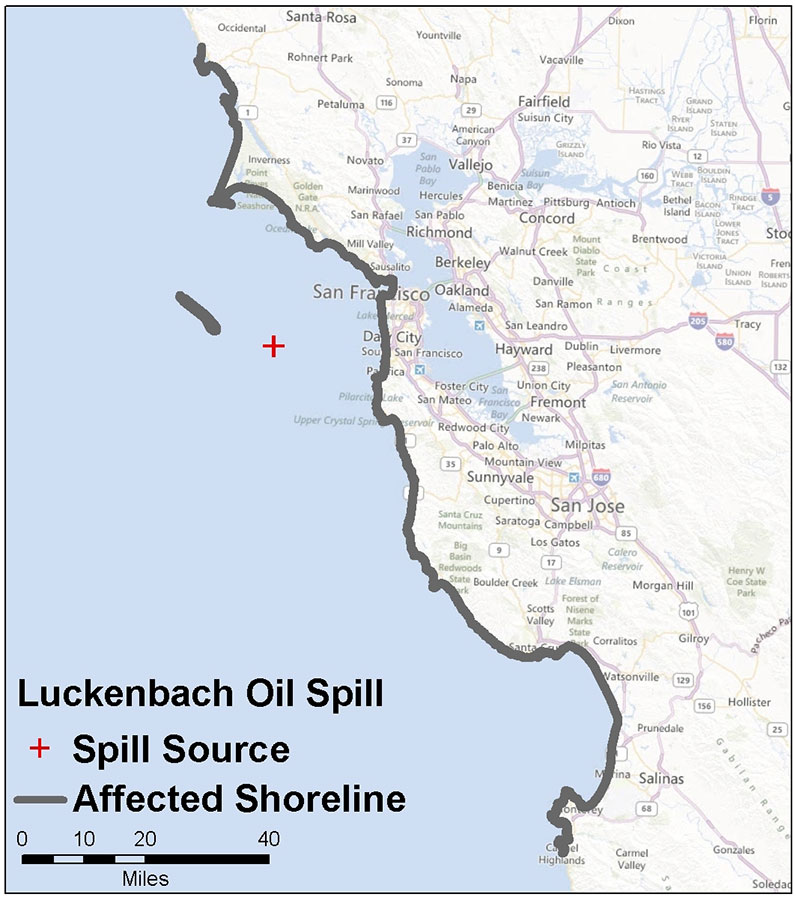 The Luckenbach sank 17 miles off the coast. The U.S. Coast Guard and the California Department of Fish and Game have identified the source of oil that has affected over 2,076 birds since Nov. 24, 2001. A submersible remotely operated vehicle collected oil from the sunken ship, SS Jacob Luckenbach, a 468-foot freighter that sank approximately 17 miles southwest of the Golden Gate Bridge on July 14, 1953.

The “fingerprint” of this oil matches oil taken from tarballs and oiled feathers from the current incident. Additionally, the oil was found to match historical samples taken from past “mystery spills” in 1992-93, 1997-98, 1999, and Feb. 2001.

Oiled birds are being brought to the San Francisco Bay Oiled Wildlife Care and Education Center near Fairfield, one of the newest facilities in the OWCN.

The California Department of Fish and Game and the U.S. Coast Guard report that the number of oil-coated seabirds found on the coast has reached 2,120 since the first ones were spotted on Nov. 24, 2001.

Birds are still be collected along the coast from Monterey to Half Moon Bay. Most of the birds affected have been common murres, birds that spend most of their time at sea, diving for food.

IBRRC, which is an integral part of California’s Oiled Wildlife Care Network (OWCN), is assisting in the search and collection as well as the treatment of birds in the Northern California center.