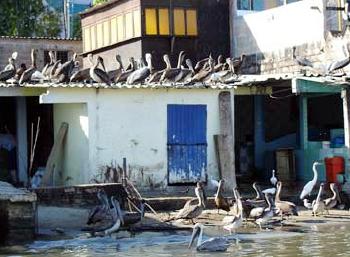 A stubborn oil spill along the coast near Veracruz, Mexico affected hundreds of birds and animals. A total of 175 birds were captured by joint IBRRC/IFAW Emergency Response (ER) Team. The spill occurred on December 22, 2004.

As aviaries were being constructed on the waters edge near the Coatzacoalcos River, dozens of pelicans and other seabirds flew overhead or sat around on the tops of the nearby buildings watching the activities going on below. Most of them appeared to be oiled.

“We have about 100 birds in-house and another 400 on-house!” said Jay Holcomb co-director of the ER Team, trying to add some humor to a very trying experience.

The rescue team captured large numbers of pelicans on a daily basis simply by baiting them in. Most were in good condition and all ate well so the turnaround from washing to release was quick.

According to Paul Kelway of the ER Team, the group captured a large number of pelicans on a daily basis simply by baiting them in. Most are in good condition and all ate well so the turnaround to washing and then to release was quite quick. 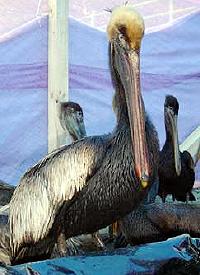 The ER Team approached 15 people strong at the height of the spill. Volunteers included students from the University of Veracruz.

The broken PEMEX oil pipeline spilled at least 7,000 gallons (26,000 liters) of oil affecting birds and animals in the Veracruz area of the Gulf of Mexico.

Reports estimated that up to 400 pelicans were impacted and requiring washing and rehabilitation. Because the oil traveled up to 7 miles (11km), the damage to wildlife and beaches was worse than originally thought. The ER Team recruited additional help in order to recover and wash more birds.

The oil spilled from a ruptured pipeline into the Coatzacoalcos River on Dec. 22, 2004 following an explosion at a pumping station near Santiago Tuxtla, about 250 miles (400 kilometers) east-southeast of Mexico City. The blast caused a burst of high pressure that ruptured the oil line 70 miles (110 kilometers) away in Nanchital, just south of the Gulf port city of Coatzacoalcos. 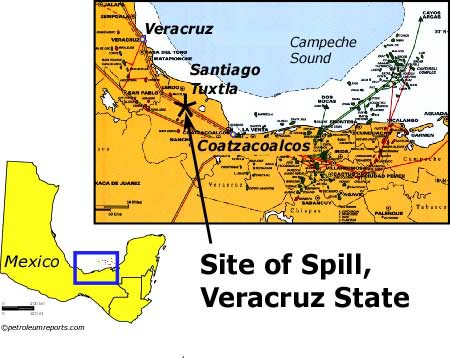 The pelicans rescued by the ER Team were cared for at a makeshift facility owned by Petróleos Mexicanos (PEMEX). The team identified possible facilities where access to good amounts of hot water was available and where the rehabilitation process following washing could be carried out. It was determined that the Fisherman’s Club was the best available facility
for rehabilitation.

The IBRRC/IFAW team gathered and trained volunteers from the local university in Veracruz to assist with the oiled wildlife operation. Pemex hired over 1,000 workers to assist in the oil cleanup. Water heaters were also purchased to provide sufficient quantities of hot water for the washing process. Pens and pools were built on the beach to house and wash the birds.

The ER Team worked with Pemex to set up waste tanks in order to properly dispose of the waste water generated by the animal washing.

About the ER Team

IFAW’s Emergency Relief (ER) Team is managed cooperatively
by International Fund for Animal Welfare (IFAW) and the International Bird Rescue Research Center (IBRRC) which brings over 30 years of experience responding to oiled wildlife. The team is comprised of leaders in the field of wildlife rehabilitation, biology, veterinary medicine and management who are professionals from Australia, Brazil, Canada, Germany, South Africa, UK and USA. In 2000 the team jointly led the response to the Treasure Oil Spill in Cape Town, South Africa, with SANCCOB, which was the largest of its kind. This required a three-month operation involving 12,000 volunteers and ultimately of the 20,000 oiled African penguins, 90% were released back into the wild. The IFAW ER Team has attended more than a dozen major oil spill wildlife disasters around the world in recent years. IFAW’s ER team now has such experience that it is recognized as having a global presence that supersedes other oiled wildlife response organizations.

– Compiled by Russ Curtis/IBRRC with help from IFAW reports.