More than a 1,000 oiled birds were treated at International Bird Rescue’s San Francisco Bay-Delta center after the deadly Cosco Busan oil spill. A container ship’s collision with the San Francisco Bay Bridge on November 7, 2007 caused a large spill of 54,000 gallons of bunker fuel oil that coated birds and other wildlife.

By January 2008, 1,084 oiled birds arrived at the Bird Rescue’s center in Cordelia. At least 424 cleaned birds have been released back in the wild. Birds are being set free at Heart’s Desire Beach in Tomales Bay. This at the Point Reyes National Seashore area about 40 miles north of San Francisco and at Pilar Point Harbor in Half Moon Bay, 25 miles south of San Francisco. Some birds are being released at Crissy Field near the Golden Gate Bridge. Read: San Francisco Chronicle story

More than 2,500 birds died in the spill. Wildlife biologists fear that more than 20,000 birds may ultimately perish from the disaster. They believe thousands of birds landed in the oily bay and then left the area to die elsewhere. Some also may have been eaten by predators.

Following the spill many oiled birds were collected on the bay and on beaches stretching north up to Marin County and south along Ocean Beach in San Francisco. Surf Scoters, Scaups and Grebes seem to be the most affected by this spill. Also, two raccoons were found dead. 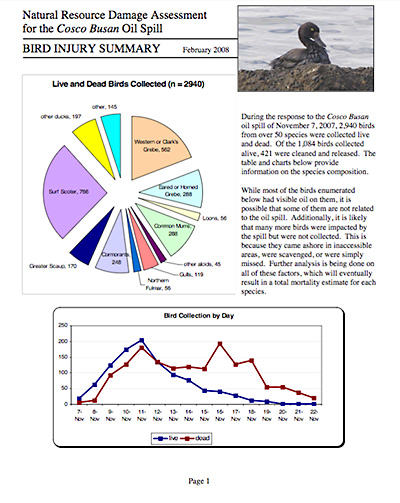 Bunker fuel spills are extremely toxic to marine life, especially birds that float and feed through a spill. The oil inhibits the birds ability to thermo-regulate and they become cold as their natural insulation in their feathers break down. The birds spend most of their time trying to preen the oil out of feathers and thus ingesting the oil. Weakened, they will often beach themselves and fall prey to predators or die from the toxic effects of oil.

Bird Rescue was activated immediately to search and rescue birds affected by the spill. The Bay Area based non-profit has a long history of helping oiled wildlife. The organization began in 1971 when two tankers collided in SF Bay spilling 900,000 gallons of oil. Since then the organization has become an expert in the field of wildlife search and collection, stabilization and the washing of oil from affected animals. IBRRC has worked on 150+ spills worldwide partnering with other groups to to train responders in Africa, Europe, Asia and South America.

Locally Bird Rescue is part of California’s Oiled Wildlife Care Network. Any oiled animals will be brought to the OWCN’s San Francisco Bay Area wildlife center for treatment. The center is managed in partnership with International Bird Rescue. It’s located near the junction of highways 80 and 680 in the Cordelia/Fairfield area. 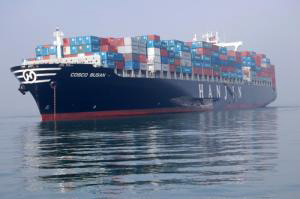 On Wednesday November 7, 2007 the Cosco Busan container ship side swiped one of the western anchorages of the San Francisco Bay Bridge. The ship leaked bunker fuel oil after a gash was discovered in its port side. The 810-foot vessel was headed out of Oakland and bound for South Korea when it hit the bridge in heavy fog around 8:30 AM. The bridge did not suffer significant damage and traffic continued to flow on the span. 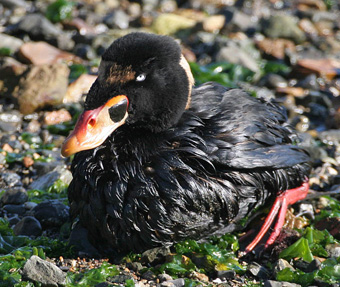 The largest spill in area waters happened in 1984 when the Puerto Rican, spilled 1.5 million gallons of oil in the open ocean off the Golden Gate in 1984. In contrast the 1989 Exxon Valdez spill in Alaska spilled 11 million gallons of oil. Some members of the IBRRC response team spent six months helping save wildlife in that spill.

Please remember: Do not attempt to wash, feed or house oiled birds and other animals! Spilled oil is extremely toxic. The use of proper gloves and protocols must be followed to insure the safety of the public AND the animals.

International Bird Rescue is a proud founding member of the Oiled Wildlife Care Network (OWCN) a legislatively mandated program within The California Fish and Game, Office of Spill Prevention and Response (OSPR) which strives to ensure that wildlife exposed to petroleum products in the environment receive the best achievable treatment by providing access to permanent wildlife rehabilitation facilities and trained personnel for oil spill response within California.