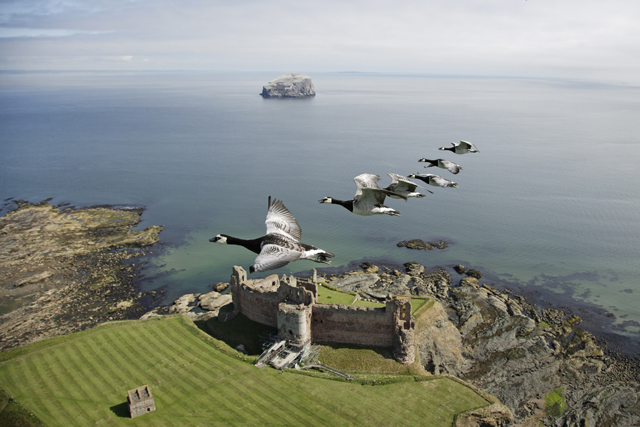 With campaign season cacophony in full gear on the airwaves, we’re looking forward to a bit of wildlife respite this weekend with the Saturday premiere of Winged Planet, an innovative documentary on the lives of birds around the world.

A co-production of the BBC and Discovery Channel, the film is directed by John Downer, whose previous works include Elephants: Spy in the Herd and Tiger: Spy in the Jungle.

In Winged Planet, the espionage theme continues. Downer fitted several different species with lightweight cameras for — dare we indulge the pun — a bird’s eye view of the world. And an exhilarating one at that.

Downer took a few minutes with International Bird Rescue’s Every Bird Matters blog to chat about his latest (and perhaps greatest) cinematic endeavor, one four years in the making.

We’ve read that you started your documentary career filming snakes. What made you move on to birds?

Downer: Snakes were just one of the subjects. I liked the idea of celebrating something that people generally didn’t like and trying to get people to understand and celebrate them by getting into their world. The next film I made was on bird flight. The challenge there was to find a way of filming them that captured the magic and beauty of their flight, although this film was made 25 years ago. I always had this in mind when I returned to some of the techniques in Winged Planet.

What type of camera made these aerial shots possible?

The “birdcams” were stripped down versions of small HD cameras. They had to be greatly modified to lose over three-quarters of their weight and had new wide-angle lenses attached.

Were the birds commandeering these cameras imprinted?

For birdcam shots, it was a mixture of imprinted birds, rehabbed raptors that had developed a strong relationship with their keeper, or at times, someone’s pet! The key was a good relationship so they would always come back, and a good temperament. 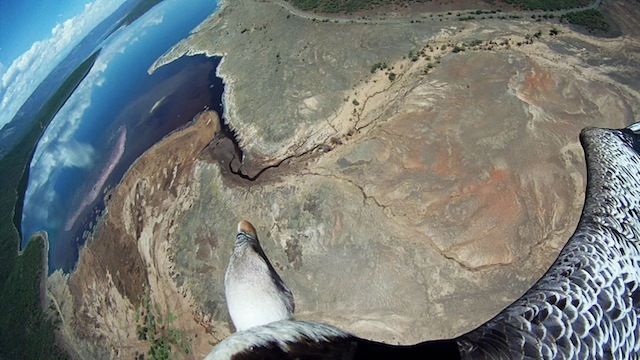 Were you surprised by any avian behavior captured on film?

I was continually surprised by what we found. But it was the relationships with other animals that became a recurring theme. For example, although we had filmed a sardine run before, we had never shot it from the gannet’s point of view (see photo below). And it soon became clear that the dolphins and the whales were both watching the gannets, and the gannets were watching them. They were pooling their knowledge to find food. The gannets were the eyes in the sky. 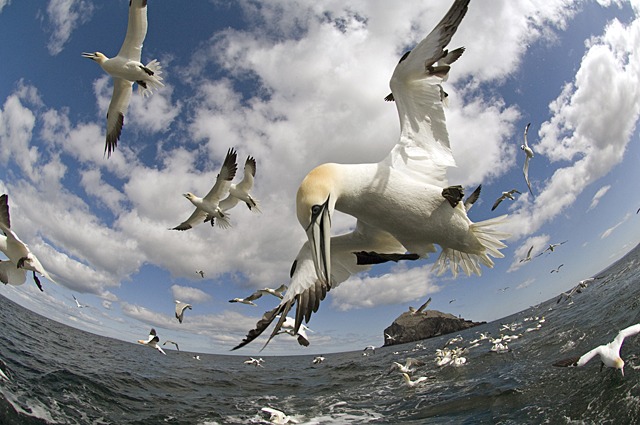 What was your favorite species to film?

I like the Common Cranes. The imprinted flocks were a joy to work with, very reliable, allowing us to fly with them over the Camargue or above the Loire Valley in France. Their courtship dance was also a delight. So entertaining.

In the four years it took to make this film, did you get a sense of the fragility of habitat many of these birds call home?

I certainly did get that sense, but more importantly, it’s evident as you follow them across continents that we’re talking about a huge network of habitats. And the birds don’t just rely on them — they rely on the life that lives there too. When you enter the bird’s world, you discover the reality of the interconnectedness of all life.

Winged Planet premieres on Discovery Channel at 8PM ET/PT on Saturday, October 6. Learn more about the film at Discovery’s website. 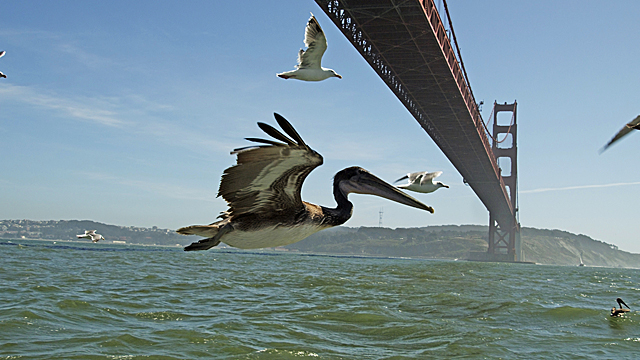