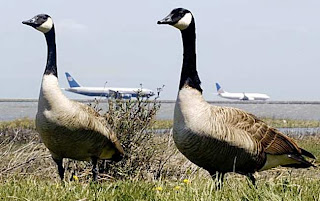 Almost 60,000 birds have been struck by commercial and private aircraft in North America a new FAA report revealed this week. The most common strike involved Mourning Doves: Pilots reported hitting 2,291 of the dove species between 2000 and 2008.

Since 1990, there was a total of 112,387 reports of aircraft striking wildlife, including reptiles and mammals, at 2,008 airports in the United States and Canada. Pilots and airlines volunteerily report bird strikes to the FAA.

Bird strikes happen most often during take-off or landing, or during a low altitude flights. A serious danger to both birds and jet engines is when a flock of birds ingested into the engine.

The most recent famous bird flock vs. jet occurred in January 2009 when an Airbus A320 struck a flock of Canada Geese while climbing out from New York’s LaGuardia Airport. The strike caused a nearly complete loss of power in both engines. Because of quick action from the US Airways flight 1549 flight crew, the plane made a successful emergency landing in the Hudson River. The 155 passengers and crew were mostly unhurt. The birds weren’t so lucky.

Many wildlife experts say the population of some birds, particularly large ones like Canada geese (photo above), have been growing as more and more birds find food to live near cities and airports year round rather than migrating. Airports also provide a wide variety of natural and human-made habitats that offer abundant food, water and cover. Many airports are located along migratory routes used by birds.