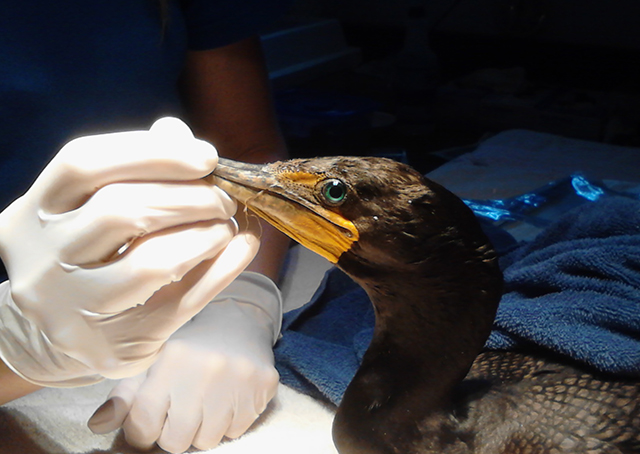 The news this week that an estimated 400,000 seabirds die in gill nets annually underscores just how much of a problem fishing methods can be for the planet’s aquatic birds. Beyond the headlines, we see injuries resulting from hooks, lures and monofilament every day at our wildlife care centers. That’s why International Bird Rescue has heartily supported initiatives to reduce fishing gear in the environment.

Among the birds in care this week at our Los Angeles wildlife center was this Double-crested Cormorant (Phalacrocorax auritus), recently brought to us from El Dorado Nature Center, where it appeared lethargic, emaciated and not so wary of humans, as it naturally should be.

The cormorant’s temperature was below normal upon intake. After a supplemental tubing, staff checked on the bird minutes later and noticed this animal had regurgitated its food — as well as a small amount of monofilament fishing line, which dangled from the side of its mouth.

Our staff did some further investigation of the esophagus region and located a hook that was stuck about halfway down the cormorant’s throat. The team succeeded in extracting the fish hook. But sadly this bird did not ultimately survive, mostly likely having starved from not being able to eat due to the fish hook and line, notes IBR director Jay Holcomb.

We can all help to reduce the amount of waste in our oceans and waterways. Find out how you can get involved at California Lost Fishing Gear Recovery Project and Coastal Clean-Up Day on September 21. 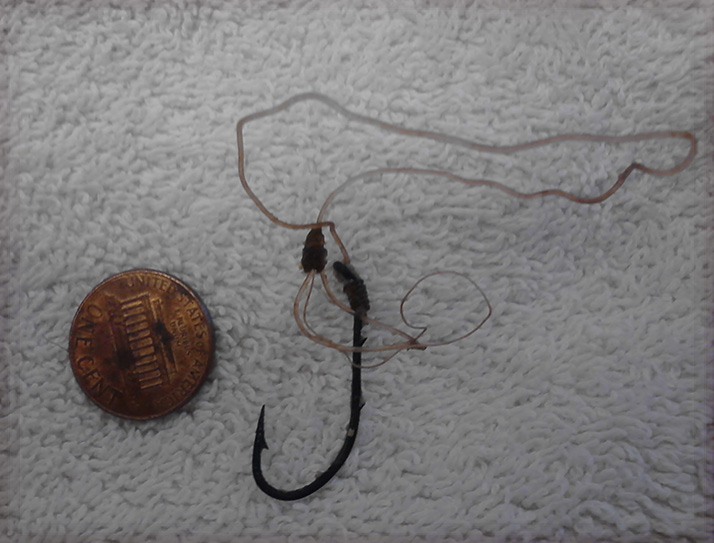 The Release Files: A cormorant found hanging in a tree net returns home