On July 1, 2021, two Elegant Tern chicks were brought to our Los Angeles wildlife center having been found on the jetty in Long Beach Harbor. Little did we know that those two chicks were the harbinger of a major seabird crisis about to unfold. 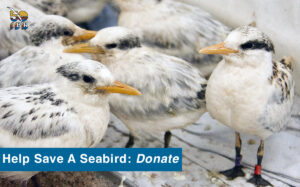 A quick field observation that day let our team know that an entire nesting colony of 10,000 Elegant Terns was in jeopardy. The colony had taken up residence on two barges that were temporarily anchored in the harbor. This is believed to be the same colony that, earlier in the nesting season, had been disturbed and had abandoned their unhatched eggs at the Bolsa Chica Ecological Reserve near Huntington Beach, CA.

The barges were covered with sand and gravel – an attractive nesting substrate. But once chicks began to hatch, the flat-sided barges proved to be an unfortunate nesting site. As the baby birds explored their environment, they began to tumble into the chilly waters of the harbor. Without fully developed flight feathers, they were unable to get back up on the barge. Stranded in the water, they were quickly becoming exhausted and hypothermic.

Without our intervention thousands of baby terns would have drowned.

“Working at the intersection of care for individual animals and species conservation, an entire generation of Elegant Terns was saved.”
– J.D. Bergeron, CEO, International Bird Rescue

Our team of professionals, working collaboratively with key partner agencies, sprung into action. From morning to nightfall every day, teams patrolled the waters around the barges, skillfully capturing baby birds that had fallen into the water and bringing them to our wildlife center in San Pedro, CA for evaluation and treatment.

More than 600 chicks were brought into Bird Rescue’s LA Wildlife center for care. Those with water in their lungs were given medicine to stave off pneumonia. All were warmed, fed, and provided with supplements to aid in proper bone development. They received daily examinations, and hand-feeding until they were able to self-feed. This arduous effort required nearly round-the-clock work by our staff and volunteers.

Adding to our urgency, Elegant Terns are near threatened, and as much as they are common along the Pacific Coast – face conservation challenges as there are fewer open, undisturbed areas for them to nest.

Elegant Terns are taught to forage and hunt by their parents. Returning chicks to the colony as soon as possible was critical to their development and survival. This crisis would persist until all the chicks on the barge had fledged, so our team searched for a long-term solution in collaboration with our partners.

That solution came in the form of multiple floating platforms or “haul-outs”, created by Bird Rescue staffers and partners, and placed alongside each of the barges. The haul-outs were low in the water with ramps enabling the young birds to quickly climb out, dry off and get warm – dramatically reducing the need for medical intervention. The boat rescue team was then able to rescue the chicks from the haul-outs, evaluate them in the field, mark and tag them, and return them quickly to their parents on the barges.

By mid-August, after seven intensive weeks, the crisis began to wind down. Young birds had grown flight feathers, the need to rescue birds from the haul-outs was diminishing, and all the chicks at the clinic had been reunited with the colony. Before release, birds were tagged, and painted with pink markings to aid in monitoring them from a distance.

The Elegant Tern moved off the barges and have dispersed to coastal areas north and south. The now-flighted juveniles, marked with bright pink, have been spotted in Malibu, in the Bolsa Chica Wetlands, San Diego and at the Seal Beach Naval Weapons Station Wildlife Refuge. Sightings of former patients thriving in the wild makes all the hard work of responding to this prolonged event all that more worthwhile.

We would also like to acknowledge and deeply thank all our partners in the field: Lenny Arkinstall of Los Cerritos Wetlands Stewards (LCWS), California Department of Fish and Wildlife (CDFW), Oiled Wildlife Care Network (OWCN), Aquarium of the Pacific, California Science Center, Heal the Bay, Marine Spill Response Corporation (MSRC), and Ocean Animal Response and Research Alliance (OARR), as well over 800 donors who helped us fund the additional food, staffing, and care needed to achieve this huge feat. We accomplished this together!

Innovation, Hard Work and Strong Partnerships Made the Difference 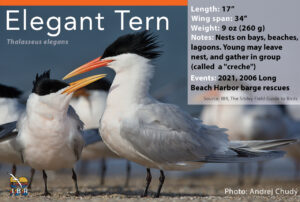