How it all began

Alice Berkner came up with the concept of International Bird Rescue while trying to help the more than 7,000 birds that filled warehouses around the San Francisco Bay Area during its 1971 oil spill. The plight of these birds inspired her, along with a handful of other concerned individuals, to do everything they could to save them, and by April of 1971 International Bird Rescue Research Center was incorporated as a non-profit organization.

Alice directed the organization for fifteen years, until 1987, and led the early research and spill responses that built the foundation for the oiled aquatic bird care that we are able to offer today. A veteran of nearly four dozen oil spill rehabilitation efforts, Alice is considered one of the top experts in the field of rehabilitation of oiled birds. She has responded to spills throughout the United States including the IXTOC, Exxon Valdez, and the New Carrissa oil spills. She is a primary author on two of the first publications ever used as standards in the field of oiled wildlife rehabilitation.

Since then, hundreds of thousands of animals have been recovered and given a second chance thanks to Alice Berkner’s vision. On behalf of all of us who have followed in your path, thank you Alice for your passion and vision in creating International Bird Rescue.

We invite you to read Alice Berkner’s captivating account of the genesis of International Bird Rescue.

The Genesis of International Bird Rescue

One million gallons of bunker oil spilled into San Francisco bay on January 18, 1971. Thousands of seabirds had been affected and there were about 16 different treatment centers scattered around the Bay Area. Tom, a friend of mine – who happened to be a veterinarian- asked me if I wanted to go to the hastily established Richmond Bird Center and help out.

As long as I live I will never forget the odor that assaulted me as I walked through the doors of the Center– Alice Berkner, Founder, International Bird Rescue

It was logical that Tom help because he had something to offer, but as an R.N. it was not obvious to me how I could be of assistance. Still, I felt badly and wanted to contribute somehow. Had it not been for society’s use of petroleum, the disaster would not have happened. I felt strongly that it was the responsibility of us all to help clean up the mess we had created

As long as I live I will never forget the odor that assaulted me as I walked through the doors of the Center. It was a horrendous mix of rotting fish, bird droppings, oil, and, strangely enough, vitamin B. Almost as bad was the noise! I’ve been sensitive to loud noise all my life and the nightmarish mix of screaming birds, guitar music, forklifts, and people voicing the complete range of human emotions in that echo chamber of a building threatened to deafen me. I was not two feet through the door when a woman came rushing toward the exit, tears streaming down her face, wailing “I’ve been here twenty-four hours and they won’t give me my own bird!” It got worse, much worse. 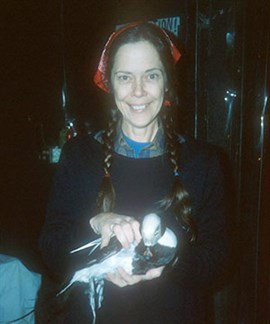 My questions regarding the treatment of the birds brought dreadful stories about mineral oil baths, absorption of mineral oil with cornmeal and medication combinations that would have killed people. Controversy raged around the tube feeding of birds with the majority belief being that to do so would result in the death of the animals. All agreed that birds obtained any water they needed from the food they ate so drinking water was not needed. I did not know much about seabirds at that point but I did question the offering of bread and milk to loons. I was told, in hushed tones, that the ‘vets’ recommended this diet.

The emotional atmosphere was difficult to understand. There was a dramatic intensity I had seen only on TV medical programs, but almost never in real hospital settings. What I found truly upsetting was the anger directed toward the corporation responsible for the spill, Standard Oil of California (later Chevron). To listen to the talk, one would have thought that the company intentionally planned to have two of their vessels collide. Granted, it was a stupid mistake, but intentional? I think not! This attitude bothered me a great deal. I found it childish, irrational and counterproductive.

Standard was funding part of the bird cleanup effort, and each week, expenses had to be justified and negotiated. It was not always easy to explain the need for shrimp to someone who knew nothing about seabirds. A vast majority of the equipment had been donated and all the labor was volunteer. Funding had been channeled through the non-profit Ecology Center in Berkeley, but Standard felt things would go more smoothly if the Bird Care Center incorporated as a separate non-profit entity. A group of us followed through, and Federal non-profit status was granted in April to the International Bird Rescue Research Center. I want to go on record here by saying that I did not favor the chosen name. I found it too long and a bit pretentious. Amongst ourselves we used Bird Rescue and reserved the long form for ceremonial occasions. To this day I avoid our full name as I do the plague.

April saw not only our incorporation but also a move from the warehouse to rent-free quarters above the Berkeley Humane Society. The remaining birds had been moved to an outside facility and could not be released until they had molted their damaged feathers, which did not happen until September. By then we knew enough to call them scoters, not scooters. We’d also learned that grebes were grebes and hurrays were murres. When the last birds were released, the few of us that remained decided to continue the organization.

Learning from a disaster

Of the 1,600 birds received by the Richmond Bird Care Center, 16% had survived. This was an unheard of success, but far from satisfactory. One of the first, and I feel, most valuable things we did was to institute a literature search in the area of seabirds, their anatomy and physiology, how they were affected by oil, the use of medication in aviculture and anything remotely connected to the problems we had experienced. We actively investigated the use of solvent to clean oiled birds but were very concerned with the toxicity factors involved with its use. It was during our four years at the Humane Society site that we read of detergent cleaning techniques developed in England.

In 1975 we moved the bird center to Aquatic Park in Berkeley, CA. By providing this location to us rent-free, the City of Berkeley has contributed to our work far more than they realize. Without their assistance our accomplishments would be few indeed. I cannot express in words how deeply grateful I am to the City of Berkeley for what they have given us for so long.

So much has been done at this location, which was perfect for our needs at the time. We had switched from solvent cleaning to detergents shortly before our move with vast improvements in survival rates. During this period we maintained and improved our relationship with Chevron. Establishing trust with them was made easy by their people with whom I associated: Forrest Smith, Bill Leek and Ivan Gilman. I made it plain that it was our wish to work with Chevron and not against them. My attitude was not that of the stereotypical “environmentalist ” of that time but that of a consumer who accepted responsibility for what could result from petroleum consumption on an individual and even species level. I felt it important to develop a cleaning technology that could lessen impact on oiled endangered and threatened species and that by responding to spills involving more numerous species precarious populations of birds would not be subject to experimentation when oiling occurred.

Chevron put us in touch with Stu Horn of Mobil, June Lindstedt-Siva of ARCO and introduced me to the various oil spill cooperative managers. We are grateful for Chevron’s support throughout the years and today one of their employees, George Jardim, is a member of our Board. In 1980 I met Chuck Webster, then of Marathon, who later served as President of our Board of Directors. We received a great “credibility boost” when we signed our first response contract in 1977 with the Alyeska Pipeline Service Company and have worked closely with them ever since. There are many companies and individuals too numerous to mention but the petroleum industry has been our greatest financial donor for twenty-five years.

Saying thanks to all that helped 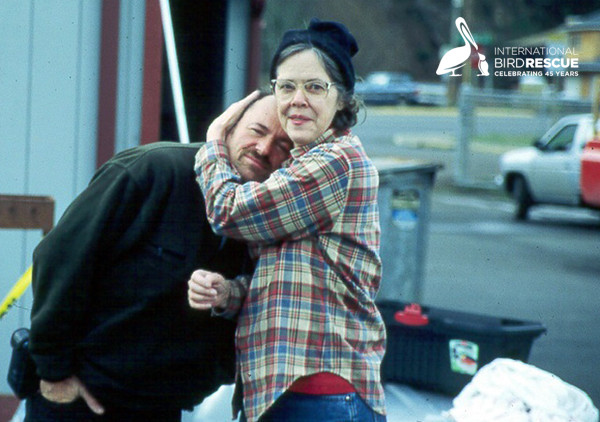 Many other agencies, organizations and individuals have also helped. The U.S. Fish and Wildlife Service at one time sponsored workshops in the coastal States. Our present Board President, Don Kane, was a member of the Service when I first met him. We have always worked closely with the California Department of Fish and Game and still have a mutually beneficial relationship with them. Procter and Gamble has donated hundreds of gallons of Dawn and much more. And what can I say about Jay Holcomb? Of all the people I’ve met in the past twenty-five years, he has made the greatest impact. The magnitude of our work increased dramatically after the “Exxon Valdez” oil spill and our growth under his guidance has been beyond my imagining. Our staff and response team, developed by him, are without peer. I am greatly indebted to him. There are others who serve in a volunteer capacity without whom we could not function as we do, our Board. Space does not permit me to individually recognize all those to whom I owe thanks but I want to express my deep appreciation to those who have helped in the past and will help in the future.

Had I been told in 1971 that 30 years hence we would end up treating over 148 species of birds (not to mention assorted turtles, snakes and other non-feathered wildlife) in 100 different oil spills on five continents and attain a 78% release rate of king eiders on the extremely remote Pribilof Islands, 100% release rate of white pelicans in Louisiana, a 96% release rate of common coots in congested and polluted Southern California or the rehabilitation of 19,200 penguins in South Africa… my response would have been “In your dreams!” But we have done just that and at times I tend to view with disbelief what we have accomplished. Many people still do not see the value in treating oiled wildlife but as more and more species head for extinction at a greater rate than ever before, perhaps this attitude will in itself become extinct for it has no place in today’s world.