A beloved member of the Bird Rescue family, Terry L. Wall, passed away in Crawfordsville, Indiana on September 29, 2021. She was 77. Terry was a clinic volunteer for many years and really shined as an administrative volunteer helping in the Los Angeles wildlife center.

Terry loved birds, and she not only gave her time and energy to Bird Rescue, but also opened her home to us. Back when Bird Rescue had more interns from all over the world at the center in need of housing, Terry hosted them in her Carson home. She also provided a place to stay for our team members from Northern California when they would come to Los Angeles and became a dear friend to many.

Terry was an integral part of the Bird Rescue extended family and we will always keep her in our thoughts and memories.

Her survivors include: her children, Aaron and Rose Wall of Crawfordsville, Indiana, Brian and Adriana Wall of Whittier, California, and Lucas and Stephanie Wall of Torrance, California; brother Dave Cacia of Palmdale; seven grandchildren; and eight great-grandchildren.

Terry was also a member of the Lutheran Maritime Ministry in Long Beach, CA.

The staff and volunteers at Bird Rescue were saddened to learn that volunteer Debbie Halter passed way on October 10, 2020. Debbie was an amazing volunteer and an extremely kind-hearted person. Since 2012, she had been helping mostly on Monday afternoons in the San Francisco Bay-Delta clinic. Debbie was always excited about all the species Bird Rescue took in. She had a fondness for pelicans and especially loved the young, orphaned birds in care – like ducklings, and young herons and egrets. Debbie always had a smile and was happy to help the staff with support or animal care.

She loved to share stories of her family and grandkids and all the family vacations, cruises and adventures they would go on. She was so proud of her children and grandkids and always shared their accomplishments with us. Debbie will be greatly missed by all the staff and volunteers that were lucky to work with her. She will always be remembered here at Bird Rescue. 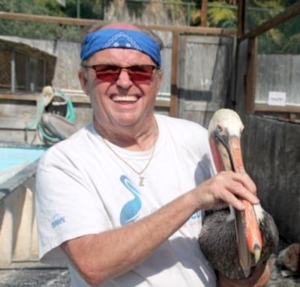 The team at International Bird Rescue is very sad to hear about the loss of one of our long-time Los Angeles volunteers, Don Ferguson. He passed away on September 29, 2019.

Don came to Bird Rescue 15 years ago with a passion for saving wildlife. He was dedicated to helping in any way he could, from outreach events within our community, bird care in the clinic, and long drives to pick up and release our patients. Don always managed to make you feel important, not only did he care about the birds, but he cared about the Bird Rescue Team as a whole. His presence and enthusiasm never went unnoticed and he will be greatly missed.

Note: To honor Don’s memory,  The Don Ferguson Memorial Scholarship is offered each year through the National Wildlife Rehabilitators Association (NWRA). It is awarded to wildlife rehabilitators to help defray expenses of attending the NWRA Symposium. Dave Weeshoff, longtime Bird Rescue volunteer and past board member, created the scholarship to honor Don.

Always interested in nature and animals, Nancy studied wild flowers in the field and gardening at home. Later in life, she found her passion in birding and, by traveling to rather exotic and remote locations, compiled a life list of over 1700 species.

She volunteered for International Bird Rescue and the San Francisco Bay Bird Observatory and was a group leader in the annual Christmas Bird Count as well as the Santa Clara Audubon summer bird count. Read Nancy’s obituary

In memoriam to Lela Nishizaki, who spent so many hours lovingly caring for the birds and making sure they had a clean pool in which to recover. We miss you dearly at the San Francisco Bay-Delta Wildlife Center.

Lela passed away peacefully in her Dixon, CA home on February 1, 2017 after a short illness at the age of 68.

Jay Holcomb, Executive Director of International Bird Rescue, an icon in the world of wildlife rehabilitation and a relentless pioneer in oiled wildlife care since the 1970s, died on June 10, 2014.

Under his direction, International Bird Rescue grew into one of the world’s preeminent wildlife organizations, caring for animals affected by large-scale oil spills such as Exxon Valdez in 1989 and the Gulf Spill in 2010, where Holcomb and his team cared for pelicans, gannets and other birds harmed by the environmental disaster.

Holcomb became executive director of International Bird Rescue in 1986 and held director and director emeritus roles through his death. During his leadership, the organization led or co-led oiled wildlife efforts at some of the world’s largest oil spill emergencies, from the MV Erika Spill in France to the Treasure Spill in South Africa. During the Gulf Spill in 2010, International Bird Rescue’s response team was mobilized in four states.

“I’ve devoted my career to wildlife rehabilitation,” Holcomb wrote in Bird Rescue’s 2013 annual report. “It’s an often unsung, crisis-based field, and the challenges in the work are many. But I can’t think of anything more rewarding I could have done with my life.”

Read the full remembrance on our blog

We at International Bird Rescue were saddened to hear of the death of Melina Mosch. Melina was a key part of Project Blue Sea, an environmental advocacy and direct action organization that we have worked side-by-side with at a number of spills in Europe.

Melina was a vital part of the team caring for oiled birds in the response center at Keila during the Estonia Mystery Spill in 2006. She later interned in IBR’s rehabilitation program at the San Francisco Bay Center in Cordelia, California and was known by us all for her hard work, thoughtfulness and her dedication to animals.

She had battled illness for several years before finally succumbing on February 20, 2010. She will be sorely missed by all of us, human and non-human animal alike.

Damien “Joey” Joseph Kam, dedicated volunteer at the San Pedro bird center and husband of one our respected former employees, Cyndie Kam, passed away unexpectedly in Newport Beach, CA, on August 28, 2009. He was 44.

He is survived by his wife, Cyndie, and son Colin, of Costa Mesa, CA, Mother and step-father, Barbara and Earl Naito, Father, Willis Kam, and Sister Teri Hampton and family.

Originally from Honolulu, Hawaii, Damien lived in California since 1994. He was an employee at PIMCO for over 4 years. Damien was a loving and dedicated husband and father.

Our heart goes out to Damien’s loving family. He will be greatly missed.

A remembrance and more photos at www.damienkam.blogspot.com

Eric John Sticht, an avid IBR volunteer and most recently a part-time facilities manager, passed away on Friday, October 19, 2007 of natural causes. He was 47.

He had a great love of nature and animals, and worked many tireless hours at the International Bird Rescue and Research Center in San Pedro.

Eric was born on September 7, 1960 in Pomona, California. He is survived by his twin brother, Mark; his sons, Sean and Kevin; and his niece, Hannah. Eric grew up in Newport Beach where he loved sailing, body surfing and cook outs on the beach.

He graduated from Corona Del Mar High School and then UC Irvine with a degree in Computer Science. Eric excelled in his computer programming jobs and his many activities. He loved to go camping with his sons. He was an avid sailor, kayaker, and scuba diver.

He will sorely missed by all his friends at IBRRC and the countless friends that crossed his path.

Update: Each year the National Wildlife Rehabilitators Association awards the Eric Sticht Memorial Scholarship. It is given to enhance the education of wildlife rehabilitators. One scholarship is awarded to help defray expenses of attending the NWRA Symposium. This scholarship is given through NWRA by longtime IBR supporter and volunteer Dave Weeshoff in memory of Eric.

Mary Dunlap a long-time friend and supporter of International Bird Rescue died on Jan 17, 2003. She was a respected civil rights attorney in San Francisco and taught law at Hasting College. Mary was the director of San Francisco’s Office of Citizen Complaints, the city’s independent police watchdog agency.

Mary died her home in San Francisco. She was 54.

Update from: “Mary Would Do It!”

“…After the disastrous November 2007 oil spill in the San Francisco Bay that threatened marine life throughout the bay and along a huge swathe of the California coast, several of Mary’s friends volunteered at a major rescue center, the International Bird Rescue and Research Center in the Fairfield-Suisun delta, for training in the intake and care of oiled birds.”