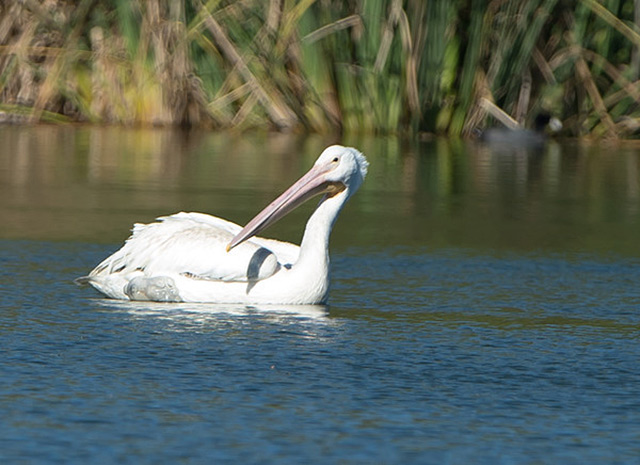 Jim Hanlon, a wildlife photographer and naturalist, writes this guest post on an American White Pelican rescue. This large and beautiful aquatic bird had gotten tied-up in fishing line at the Sepulveda Basin Wildlife Lake, and through some very creative and persistent community teamwork, the bird was successfully captured two days after the first sighting. The White Pelican was treated for injuries at International Bird Rescue’s Los Angeles wildlife care center in San Pedro and was released on December 1, 2012 at 11 a.m. Jim Hanlon’s work can be viewed online at hanlon.smugmug.com.

Indian summer-like conditions were swirling in Southern California on October 24, 2012 at 10:07 p.m. in the evening when I and others in the Sepulveda Basin birding community received an email from Muriel Kotin of the San Fernando Valley Audubon Society (SFVAS) indicating that a White Pelican was in distress at the Sepulveda Basin Wildlife Lake. The bird’s leg and wing were tied-up by fishing line tied to a plastic bottle, a common fishing pole substitute used by illegal fishermen at the lake.

Passion stirred within, and several other birders and I were out there the following morning to search for the bird. Two Turkey Vultures were first sighted on the small island at the center of the lake foraging on the ground, and immediately I thought, This can’t be good. Then moments later while hustling to Station 3 at the lake, I came across a middle school field instructor with 15-plus students taking a bird walk. The instructor had seen the pelican between the cove and Station 2 and indicated that the bird was having trouble flying. The overall situation didn’t look good. So I continued to Station 3, which is the only way to look back at the cove, situated just south of Station 2 (the point), and there nestled behind some reed with a bottle in tow was our tied-up and distressed “Firebird,” a beautiful American White Pelican (Pelecanus erythrorhynchos).

I quickly telephoned the L.A. City’s Animal Rescue Service, and shortly thereafter they sent out agents Glen Julian, Armando Navarrete and Ernesto Poblano. Glen suited up in a dry suit and entered the lake on a boogie board. However, fins were accidentally forgotten, which made the board more energy consuming and difficult to maneuver. Glen managed to coax the large pelican into the cove, and then the bird started moving up toward me where I was positioned at Station 3. I happen to know this pelican and his relatively large (80-plus) colony very well, and it was almost like he was coming toward me looking for my help. I softly flashed a white net to keep the pelican from going further south away from Glen, and that worked to some degree. However, just as Glen started to reach for his net located at the small of his back, the stealthy big bird scooted right by him to the north, and that was it in a flash. The chance to have captured the bird right there at lake’s edge was missed, and by such a close moment involving a realistic split second of pause. In frustration, I then backed away in heavy disappointment, regained composure and quietly became more determined than ever to see this pelican rescue through. It was now approximately 4 p.m., and the SMART team decided that everyone should reconvene the following morning for a second attempt.

Armando from SMART and I arrived at the lake the following morning with two other birders, and none of us could spot the injured pelican after an hour-and-a-half walk around the entire lake. I was now standing with several Audubon members at the point (Station 2) feeling very disappointed and agitated knowing that the rescue team, which was also searching the lake, would leave soon if we didn’t spot the pelican. However, I absolutely was not willing to give up — a classic rule for most worthy achievements. There was just too much energy and compassion building up for this bird at this point, and time was of the essence. So as I had done with the rest of the lake previously, I raised my binoculars and intensely examined the reed at the bank in the final unexplored section across from the point, and sure enough there he was, hidden deep within the reed with slight glimmers of white coming through. What a sight! A mere 10 minutes later, one of the foraging pelican pods of 15-plus glided right by our distressed bird in hiding. And then our injured pelican decided to come out with the bottle in tow. The bird wandered the whole lake for the next two hours, and as soon as the complete rescue team arrived, Firebird had nestled himself up on land, at lake’s edge, in the cove, at the perfect spot for capture. Interestingly, I was actually asking the large bird calmly and quietly (maybe more telepathically than literally or a little of both) to go to that area the whole time. After all, Firebird had spent several hours there on the previous day, and I was now clearly and emotionally connected to this very large bird in need of our help.

It was now time for L.A. City’s one and only SMART team to gear up and go into action. And that is precisely what they did. It was a fairly quick, clean and well-executed capture. Annette Ramirez of SMART, a hero with compassion, paddled out in a just-purchased inflatable kayak and blocked the bird at his perch. The netters then quickly swooped in. At this point I had lost my angle of view, and approximately two minutes later I saw Ernesto Poblano of SMART carrying the pelican ever so nicely, with the beak properly open a little for breathing and the soft towel perfectly covering the eyes while containing the large bird. Ernesto laid Firebird down and the team went to work on removing the fishing line and checking the wings over. The team noted one small tear on the lining, at the edge, on the elbow of one wing along with a slight cut on the upper leg, so additional care was deemed necessary.

Congratulations and big hugs of gratitude go out to all of the fine members of the SMART rescue team for persevering, improvising and bringing a potentially difficult capture to a smooth and successful conclusion. Armando, while waiting for the balance of the team to arrive, resourcefully made a quick run to Big 5 to purchase the kayak out-of-pocket, and I gladly later reimbursed him for this. Well amongst all the excitement of the rescue and concern for the condition of the bird, however, there was one very special and subtle moment of pure compassion that lit my heart. It was so good I had to step back from the scene for a moment, look at the edge of the lake, and if there was ever a time to feel grateful, this was definitely one of them. For immediately after Annette Ramirez finished her last check of the wing, she then softly petted the animal’s wings twice with such caring affection, a clear communication to the distressed bird that we were there to help him. And this was Annette’s final move before transferring the White Pelican back to the truck for transport. Annette is a tremendous asset to the rescue team.

The pelican was immediately taken to the East Valley Animal Shelter, and then later that afternoon transferred to the California Wildlife Center in the Malibu mountain area. Being a large aquatic bird, one of the largest with up to 9-foot wing spans, the pelican was then transferred several days later to the Olympic stadium of aquatic bird recovery centers, i.e. the International Bird Rescue (IBR) facilities in San Pedro.

Chapter 2 now for the rescued White Pelican was medical attention and rehabilitation at IBR’s 40-foot-long and 100-foot-long cool water aviary pools along with 20 other Brown Pelicans also currently under IBR’s intensive and extensive care. A recent conversation with Dave Weeshoff, an experienced and dedicated IBR volunteer and President of the San Fernando Valley Audubon Society, showed me the vast amount of IBR expertise, care, effort and time that goes into bringing distressed birds back to a condition of strong health in order for the birds to have the best chance for survival once released back into the wild. Release criteria includes good blood values, weight, temperature, ability to fly between perches, demeanor (I know Firebird will pass this one) and appetite. The pelican eats 3-4 pounds of fish per day. White Pelicans tend to prefer freshwater fish, making the $1 per pound sardines at the center not very tasty. Dave says the White Pelican prefers the more expensive night smelt at $2 per pound, and when I offered to bring over some tilapia, Dave elaborated even more on the benefits of not feeding them oily fish, which can drop in the water and create other problems.

On the medical front was the healing of a silver-dollar sized wound at the edge, on the lining, at the elbow of one wing. For this, IBR technicians use a technique known as debriding, where the scab of the wounded area was removed every two days or so. Evidently, these birds heal from within and debriding helps. There was also a slight constriction wound around one leg. The bird’s main 14-inch flight feathers were in good condition, and the overall prognosis for eventual release was good. On November 12, Firebird was working out and feeding in the 40-foot aviary pool at IBR. This wonderful bird and I are as grateful as ever for everyone’s contributions in the rescue including Audubon members, the SMART rescue team and IBR’s incredibly talented and devoted staff.

On November 16, I was able to visit our White Pelican and tour the IBR facilities, and what I saw there was nothing short of incredible.

And words could never explain just how important (and cool) this place is. Efficient state-of-the-art facilities, people and procedures all geared toward helping injured aquatic birds including pelicans, cormorants, grebes, seagulls and others. The facilities were primarily established to help large numbers of distressed birds in case of an oil spill; however, IBR helps birds all year around for a variety of conditions.

Interestingly, I was standing 100 feet away from the aviary talking quietly with Dave for a few minutes before entering the aviary to see our pelican for the first time. And while we were talking, I glanced over at the aviary, and there was Firebird poking his head up and looking right at me. All the other Pelicans were busy doing something else, but this one wouldn’t take his eyes off me. Perhaps I’m a member of his Pelican pod now. But Dave reeled me back in, and explained that they don’t like the birds to get too comfortable with human interactions, as it’s important that they remain wild, which I clearly can appreciate.

This pelican was released back at the Sepulveda Basin Wildlife Lake on Saturday, December 1 at 11 a.m. However, the story is far from over.

In the spirit of author Paulo Coelho, I would like to suggest that like all great birds written about in prior myths before him, our rescued American White Pelican (“Firebird”) will strike his own chord by soaring to great heights in the sky just before sunset. And on that day and on each and every anniversary of that day for eternity, whether via himself or his eldest of kin, this great bird will release magical gifts of gratitude for one full hour to all those willing to watch and listen for his blessings. 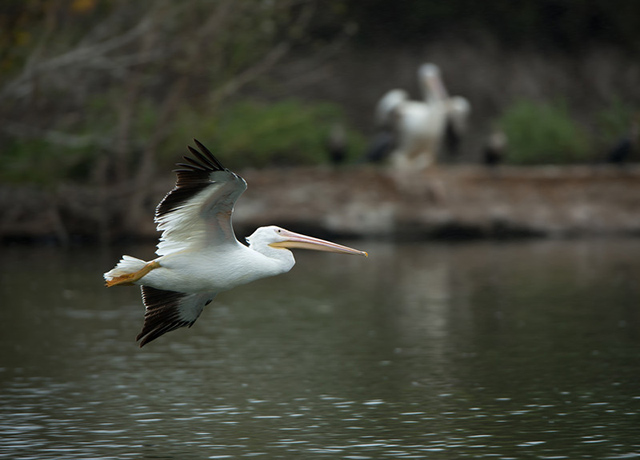