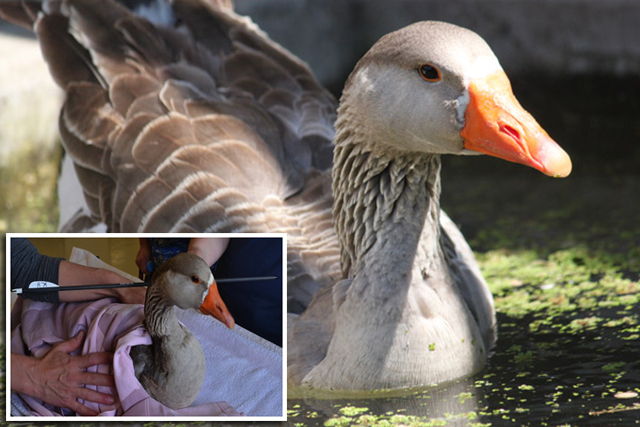 We’re pleased to report that the Greylag Goose recently brought to International Bird Rescue’s San Francisco Bay center with an arrow wound through its neck is doing well.

Center Manager Michelle Bellizzi informs us that the goose has “graduated to a water-based aviary in preparation for his/her placement/return to Napa Wildlife,” the organization that had captured the bird and brought it to us for surgery and care (read more on this bird’s treatment and surgery by Dr. Rebecca Duerr here).

According to local reports, an individual has stepped forward in this incident. Via Napa Valley Register, which was a key media source in solving this case:

A 14-year-old boy who lives along the Napa River admitted shooting a Graylag goose in the neck with an arrow in late March, Napa County Sheriff’s Capt. Tracey Stuart said Wednesday.

The boy said he meant to shoot the rubber-tipped practice arrow into the ground to shoo a gaggle of geese away from the family’s yard, she said.

“The young man was visibly upset, very remorseful about hurting the goose and has no history of similar behavior,” Stuart said.

The case was discussed with a prosecutor from the Napa County District Attorney’s Office, Stuart said. “It is likely that the young man will be devoting many hours to community service, helping and learning about animals,” she said.

Unfortunately, cases like this one are rarely solved. According to The Humane Society of the United States (HSUS):

—Wildlife officials estimate that nationwide, tens of millions of animals are killed illegally each year.

—It is estimated that only 1 percent to 5 percent of poached animals come to the attention of law enforcement.

In California, animal cruelty is a felony and police take animal cruelty cases seriously. With the goose and arrow as evidence, the Napa Police began a criminal investigation and the HSUS put up a reward of $5,000 for evidence leading to arrest (null in this case, as the offender turned himself in).

Many individuals and organizations came together to help this goose, including: 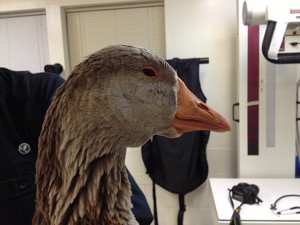 —Our volunteers and staff who have cared for this beautiful Greylag Goose, now looking for a safe and proper home! —Karen Benzel