Skip to content
Home | Blog | An Update on Pelican Rescue 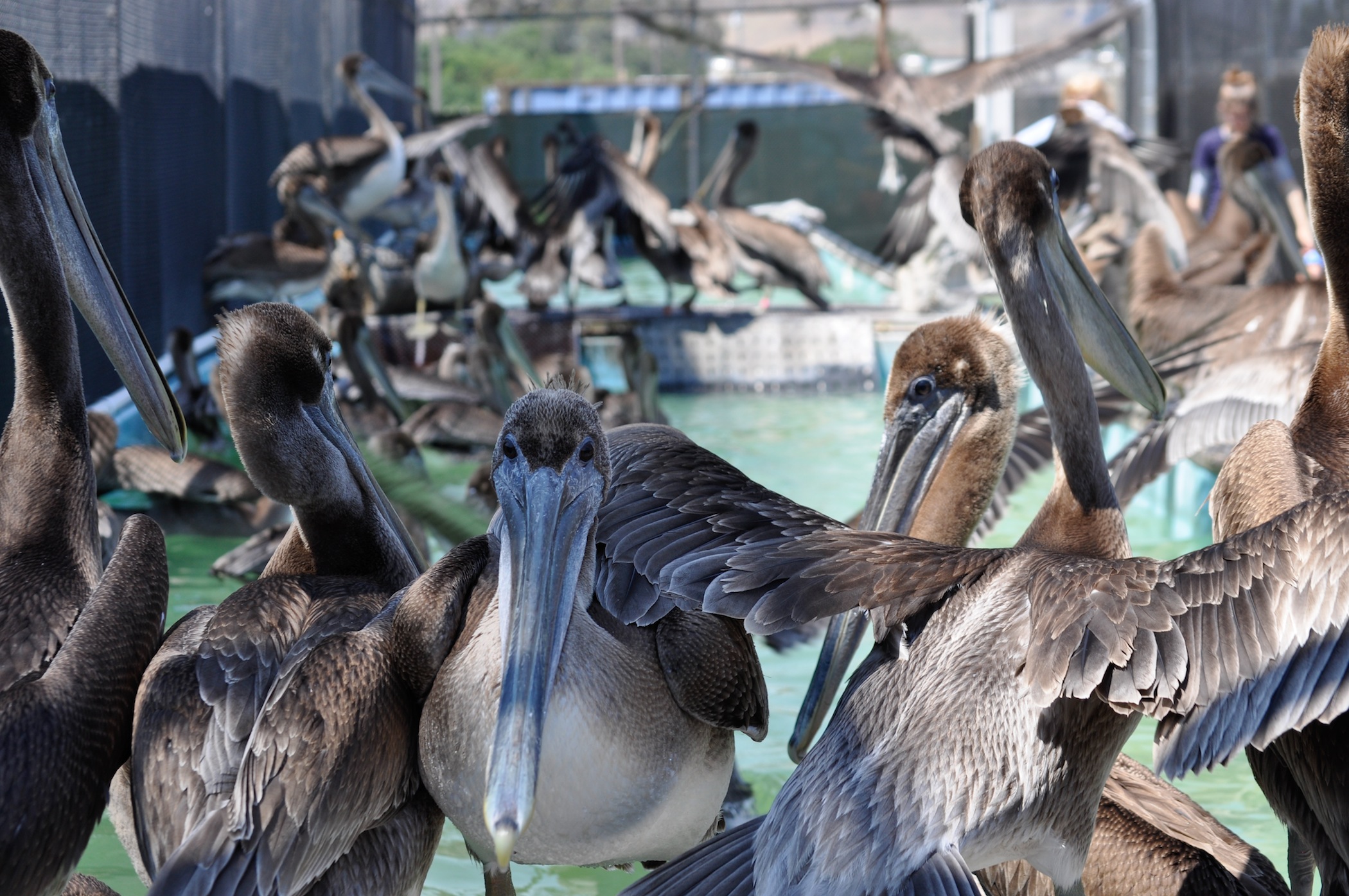 We wanted to update everyone on our ongoing pelican rescue efforts this summer. California Brown Pelicans have been pouring into International Bird Rescue’s Los Angeles and San Francisco Bay Centers since the beginning of July, and even with joyful releases back into the wild, our aviaries are still packed with 256 Pelicans.

When young Pelicans first attempt to hunt for themselves and have difficulty finding food, their weakness can give way to a host of secondary injuries, and sometimes these natural challenges are compounded by increased human-caused threats during summer months. The Pelicans are coming in weak, thin, disoriented and sometimes tangled in fishing tackle, pierced with fishing hooks and even covered with fish oil from fish cleaning stations in harbors along the west coast.

At International Bird Rescue, struggling Brown Pelicans are evaluated upon intake, tubed with fluids to rehydrate them, given plenty of fish, and kept indoors until they are deemed strong enough to graduate to the outside pelican aviary. They then spend a lot of time eating and socializing with other Pelicans. In order to be released they must be of normal weight, have normal blood values, have perfect waterproofing and pass a flight test of 90 feet, from high perch to perch. The average rehabilitation time for non-injured young pelicans is about 10 days. Injured birds follow a similar routine with the addition of antibiotics and sometimes splints, wraps, physical therapy or surgery, and thus a longer stay at our centers. In essence, we are giving all of these inexperienced young Pelicans a second chance, and then it is up to them.

The great news is that Brown Pelicans often do very well after rehabilitation, and we can’t thank you enough for helping to offer these birds the opportunity to live on and rejoin the California Brown Pelican population. We also want to thank the SeaWorld & Busch Gardens Conservation Fund for supporting our efforts with an emergency grant to our centers.

The majority of donations though have come from concerned citizens like you who made the decision to make a difference. In fact, inspired by International Bird Rescue’s dramatically increased activity and expenses during this influx of Brown Pelican patients, two Bird Rescue supporters have offered gifts totaling $6,000 that will match any new donations dollar for dollar during this crisis, helping us keep up with the hundreds of pounds of feeds we go through every day.

How do we know that all of this pays off? Each bird that is released from International Bird Rescue is federally banded, but even with binoculars metal band numbers can be difficult to read, so in 2009 we began adding larger numbered bands made of blue plastic to the other leg of each rehabilitated Brown Pelican. As reports of the banded birds come in we are able to track what happens to rehabilitated birds after they are released. Re-sighted Pelicans, such as K15 who has been spotted on three occasions (as recently as February 2012) since his July 2011 release, illustrate rehabilitation success and help with research to improve the care we offer these special birds.

International Bird Rescue’s goal is to restore these young Pelicans to health so that they can have a second chance to become thriving adults who can contribute to the future of Brown Pelicans in California. As our rescue efforts continue we’ll do our best to keep you abreast of how we’re doing, with thanks to you.

1 thought on “An Update on Pelican Rescue”