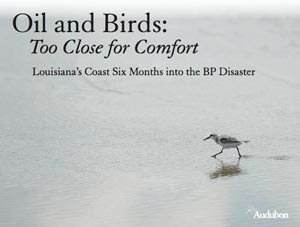 Our friends at Audubon, the national bird advocacy group, has an excellent report out this week entitled: Oil and Birds: Too Close for Comfort. The 28 page illustrated report details the lasting effects from the nation’s largest maritime disaster from the BP oil leak on the Louisiana’s Coast and its avian residents.

The Audubon Society says the residual oil and chemicals from BP’s Deepwater Horizon disaster still pose substantial risks to birds that breed or nest along hard-hit areas of the Louisiana coast.

“People shouldn’t be fooled into thinking that the danger to birds and the environment is over just because the oil stopped flowing,” said Audubon President & CEO David Yarnold. “It’s going to take years of monitoring just to understand and start dealing with the long-term impacts of the oil — and they’re just part of a much bigger threat.”

The offshore oil drilling rig exploded and sank in April 2010 about 45 miles off the Louisiana coast. After 87 days of leaking 200+ million gallons of crude, the rig was finally capped. More than 8100 birds were officially affected by the spill. Of those, 6100 were collected dead. IBRRC worked with Tri-State Bird Rescue to help stabilize, treat and clean as many oiled birds as possible. More than 1,200 birds were released back to the wild.

To read the full report, download it here. (PDF 4 MB)