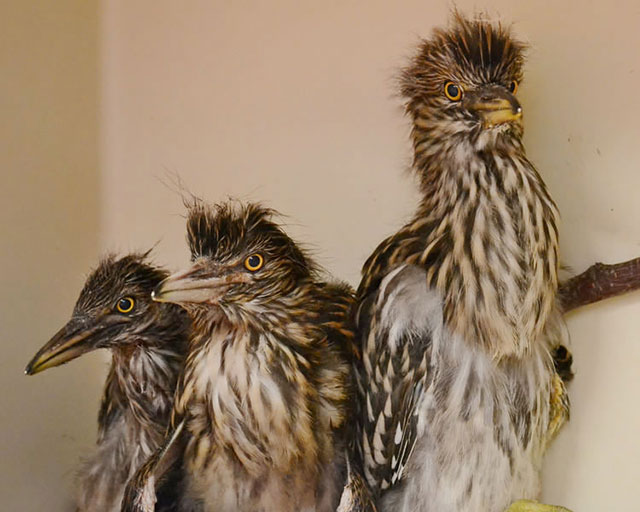 Some of the young Black-crowned Night-Herons rescued from the incident. Photo by Isabel Luevano

A grisly scene emerged out of the San Francisco Bay Area when tree trimmers in Oakland recently were allegedly caught feeding downed branches full of Black-crowned Night-Heron nests and chicks directly into a woodchipper. The San Francisco Chronicle reports:

Officials at the downtown post office ordered nearby trees trimmed Saturday because nesting birds were defecating on the mail trucks.

The result, witnesses said, was a feathery massacre that ended with nests – and baby birds – fed through a wood chipper, hysterical neighbors protesting in the street, and a call to Oakland police officers, who ordered the trimmers to stop.

Now, state and federal wildlife officials are investigating the matter, because the nest destruction and bird deaths may have violated the U.S. Migratory Bird Treaty Act.

“I’m devastated. That someone could do that without even looking to see if there are nests, could have so little empathy … it’s heart wrenching,” said Stephanie Benavidez, Oakland’s supervising naturalist. “The public was incensed, rightfully.” [Read the full story here.]

Residents in the neighborhood brought surviving chicks into the care of wildlife rehabilitators. The five saved babies were 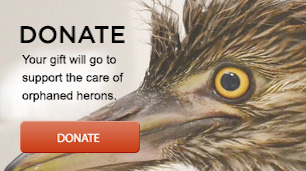 ultimately transferred to our San Francisco Bay center in Fairfield, where they’re currently being taken care of in a warm incubator. In addition to scrapes and bruises on the birds, one orphan underwent surgery to repair a fractured mandible.

We’ll keep you posted on this story as well as the condition of the birds.