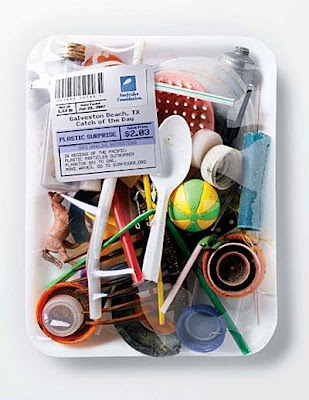 Garbage at the beach may be as common as salt in the ocean, but a recent public service campaign adds a disturbing and humorous twist.

A “Catch of the Day” campaign by the Surfrider Foundation uses beach trash wrapped like supermarket fish items to educate people on the amount and kinds of pollution dumped into our seas.

Working with the global advertising firm Saatchi & Saatchi, this real trash was collected from various beaches in the U.S. The items – plastics, styrofoam and even condoms – were then offered up at farmers’ markets to make a point with the public.

Here at Bird Rescue, we’ve been speaking out against the constant remnants of our throw away society. If you’ve ever walked the beach after a winter storm, you’ve seen the bits of plastic debris that litter the shore. The amount of plastic is astounding. Bottle caps, toys, cigarette lighters, fishing line and other plastic garbage litter the high tide mark along many of our beaches and harbors. 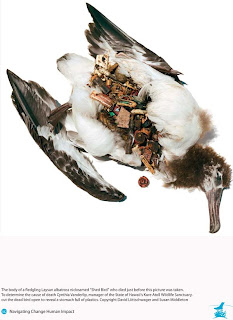 Scientists have documented this surge of plastic trash in our waterways that directly affect seabirds. In many areas of the globe, birds inadvertently feed on plastic floating on the water, mistaking it for food, and many times this ingestion leads to death and even the death of their young. See photo to the right >>>

When you visit a beach, take time to pick up the litter left by others and dispose of it properly. To be part of the world’s largest, one-day volunteer clean up held every September, sign up for The International Coastal Cleanup (ICC) or the California Coastal Cleanup. Volunteers can show their commitment to cleaner waterways by working together to clean local beaches, rivers, lakes and canals. 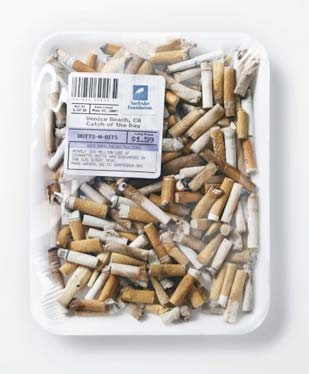 Kudos again to our friends at the Surfrider Foundation, the organization working towards protection and enjoyment of beaches, sea-shores, oceans all around the world.

More info about plastics and the oceans: