The Gulf oil spill catastrophe and the plight of the wildlife has touched many around the country. We continue to receive numerous e-mails, phone calls, and contributions in support of our organization’s effort.

One of the great joys is to see children who have been inspired to get involved. Lemonade has been a big seller. Some kids do art. Others a bake sale. In each example, big hearts and young minds come together to give us all hope. Some of these stories follow: 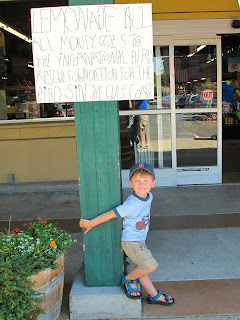 In Martinez, California, 3 year-old Zachary Bigelow wanted to help so bad he was ready to hop a flight down to the Gulf States to lend a hand. He settled on a local lemonade stand. His mom, Allie, explains:

Zachary first learned about the oil spill on the news radio and then saw photos of the birds that were affected by it in the New York Times and online and they really upset him. His initial “plan” was that he thought he should head on down to the Gulf Coast on his own to clean the birds, but I had to squash that idea (we will do that when he is a little bit older). He settled for the idea of donating some money for them and decided he wanted to have a lemonade stand since he didn’t have much in his piggy bank at the time.

He wrote a letter to the Trader Joe’s store in Concord (Concord Avenue) and asked them to donate lemonade; they generously provided him with 2 cases of organic lemonade. He then asked the manager of the Sports Basement store in Walnut Creek if he could sell his lemonade in front of their store; they were very helpful in finding a good weekend that would guarantee lots of traffic. He asked friends to bake goodies to sell to improve his profits; our friends Adam Welcome and Erica Kain provided some really delicious baked goods for him to sell. He made all of his signs himself and did all of the selling unassisted…mom and dad were just there to pour! When all was said and done he sold lemonade for 6 hours, selling every single drop of lemonade donated by T.J.’s and every last cookie and brownie and raised $355. 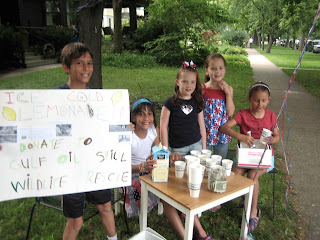 Over the Fourth of July, kids in Evanston, Illinois raised money for rescuers by selling lemonade.

And from New York we got this note and photo from Alicia Salzer:

“I just want to thank you for the work that you do. My daughter Piper, age 5 was so upset by the idea that birds were being hurt by the oil spill that she decided to make special painted sea shells and sell them out of her red wagon on Fire Island here in New York. Everyone who passed stopped to look and when Piper told them about the cause she was supporting of course they bought up those shells and in a few minutes we had totally depleted her “stock”.” 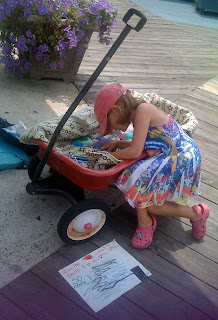 “I recently sent in her donation of $26 via your website. But I wanted to also send you a little picture of her hard at work in the hopes it warms your heart as it did mine and inspires you to keep up the great work that you do caring for creatures caught in the crossfire.”

Another young fellow, Jonathan, who is only 4 years old, helped his mom sell Pelican Aid Lemonade near his home in New Orleans instead of selling off his treasured toys.

“I want to help the pelicans,” Jonathan said, realizing he couldn’t help save oiled wildlife directly. “Because (the oil will) get in my eyes and ears and nose and mouth.”