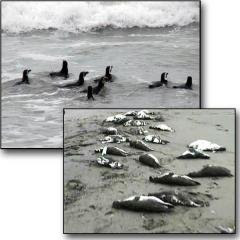 Scientists in Chile are trying to unravel the mystery of dead birds including penguins and baby flamingos and a massive die off of sardines.

In the last few months, thousands of dead Humboldt and Magellanic penguins washed ashore in late March. Along with them tons of dead sardines showed up as well. The animals littered the beaches in the southern portion of Chile’s Region XI.

Some fear that global warming is the culprit and others think the cause might be overfishing, pollution and bacterial disease. In the case of the penguins, some believe they got caught in fishing boat nets – something that has been known to happen according to local authorities.

So far the three ecological events are unrelated but more study is undergoing.

Read more in the Miami Herald: The birds are dying, and no one knows why