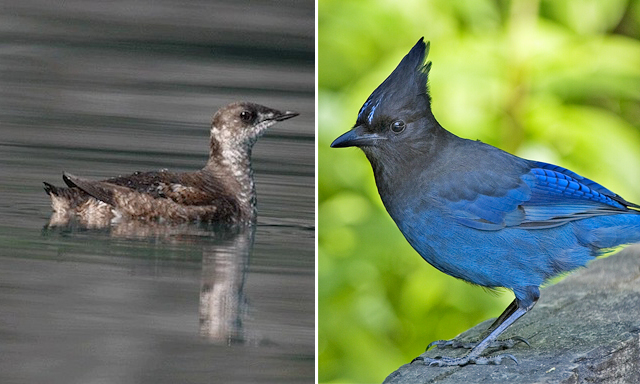 —Efforts to save the endangered and elusive Marbled Murrelet have become the subject of increased attention along the West Coast. But one particular strategy officially has gone viral:

A member of the Auk family that calls the North Pacific its home, Marbled Murrelets nest high in old-growth forests  — a quirk that wasn’t even discovered until 1974. Loss of nesting habitat isn’t the only problem for this bird. The murrelet’s eggs have also faced predation by the aggressive and abundant Steller’s Jay.

In a strategy that includes PR efforts aimed at reduced feeding of jays and limiting campsites near murrelet habitat, scientists are employing conditioned taste aversion to induce vomiting in the egg-feasting jays. Via Smithsonian:

Basically, scientists are going to paint the odorless, tasteless chemical called carbachol onto the eggs of the marbeled murrelet. This way, when an egg-eating Steller’s jay comes along and tries to chow down on the endangered birds’ vulnerable eggs, the jay will puke immediately. This sudden, extreme response is perfect for teaching jays to avoid murrelet eggs, researcher Keith Benson told Live Science: “All of a sudden, their wings will droop, and they throw up. That’s exactly what you want — a rapid response — so within five minutes, they barf up whatever they ate.”

This sort of conditioning of the jays is called conditioned taste aversion (CTA). The Fish and Wildlife Service explains that ‘jays that ingest carbachol-treated eggs are expected to associate the unpleasant experience with murrelet eggs such that they modify their behavior and avoid ingesting actual murrelet eggs they encounter in the future.’” [Smithsonian.com]

—Federal agencies have approved the Terra Gen 2,300-acre Alta Windpower project in California’s Tehachapi Mountains, despite deep concern among conservationists about the energy project’s proximity to the historic range of California Condors, which number only 234 in the wild. The LA times reports that a telemetry system will be employed to detect radio tags on the condors, causing the turbine blades to slow to about 3 mph within 2 minutes. [Los Angeles Times]

—Cruelty against aquatic bird species is a global problem. In Western Australia, we came across this story of two Australian Pelicans 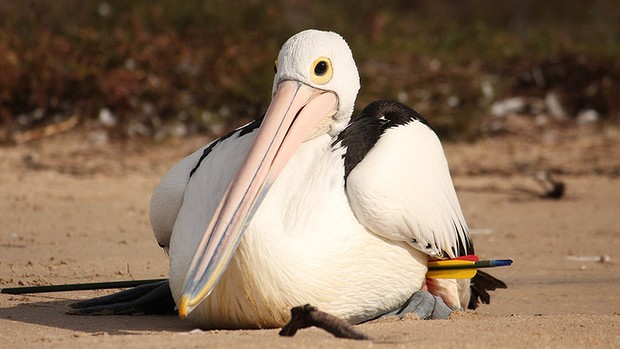 used as target practice (one was humanely euthanized as a result of its injuries, another is being rehabilitated). In just the past few months, International Bird Rescue has seen multiple cruelty cases, from a Greylag Goose shot with a target arrow to a Brown Pelican found with its wings crudely clipped. [WA Today – Australia]

—Stopover sites along the African-Eurasian flyways are vanishing, with rates of decline the steepest among any global ecological system. [AllAfrica.com]

—TwitPic of the day, via Russ Curtis: 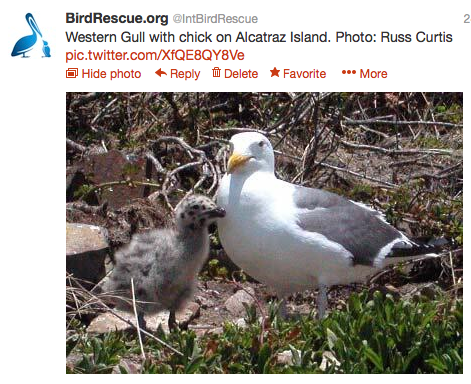 Are you following us on Twitter? Check out @intbirdrescue for your “Every Bird Matters” fix!