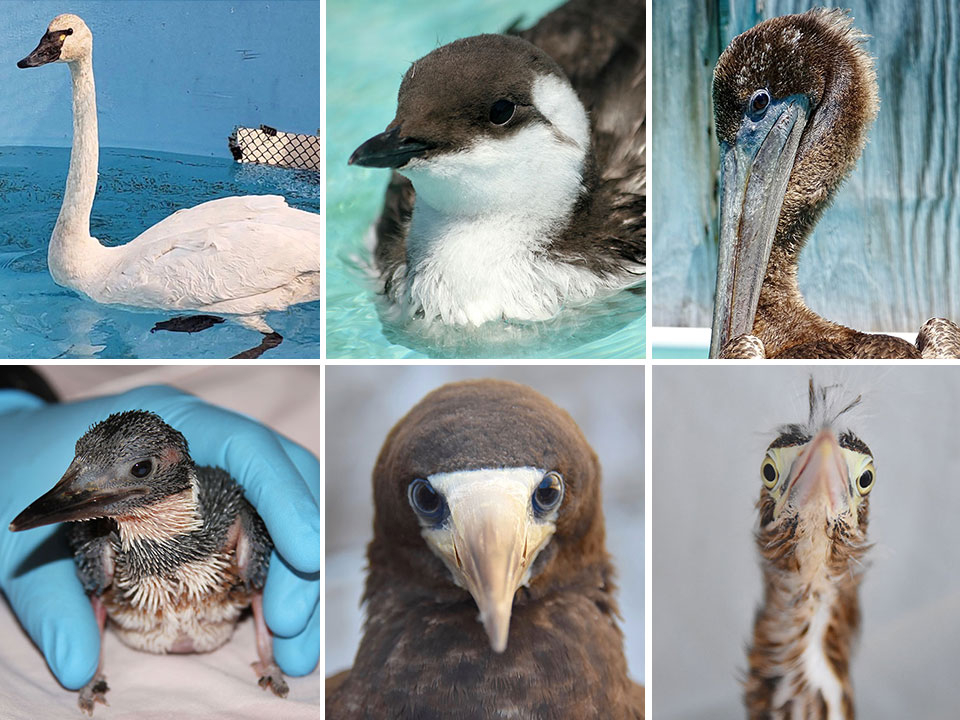 As another eventful year at International Bird Rescue comes to a close, the time has come to reflect on our experiences and accomplishments and select our 2018 Bird of the Year. Each bird that comes through our doors gives us the opportunity to take action, help a creature in need, and oft times learn something new about nature and about ourselves. The six candidates below are patients that were representative of significant events and key aspects of our mission from the past year. Please enjoy reading a bit about each one and if you have a moment, vote for the bird that most inspires you to take action to protect the natural home of wildlife and ourselves.

When wildfires tore through California causing devastation to people and wildlife alike, Bird Rescue was able to lend a helping hand when a Tundra Swan was found in crisis near ground zero of the Camp Fire. A local resident delivered the bird to a nearby rescue facility who later transferred the swan to our SF-Bay Delta wildlife center where it could recover in our large pools and waterfowl enclosures. Upon arrival the swan was covered with ash, smelled of smoke, and was suffering from red, irritated eyes due to the smoke and fire. Swans are large and unruly patients, so our staff and volunteers had to put in extra time and work to care for this bird. After two weeks at our facility, the Tundra Swan was healthy and ready for release. Our team picked out a location where a flock of migrating swans had recently been sighted and released the swan to continue on its southward journey for the winter.

Throughout this summer, Bird Rescue received a large influx of young, hungry Common Murres that had been found stranded along Northern California beaches. Among them was a young murre we named “Mara” after the volunteer who rescued her from the shore. Bird Rescue staff and volunteers were all-hands-on-deck for weeks as we strove to keep up with these hungry and growing birds. We were truly inspired by our community of supporters that came together to help fund the care of all these birds in need. After over a month in our care, Mara and dozens of her fellow murres were released back to the wild.

California Brown Pelicans caught the attention of national media when two young pelicans crash landed at a Pepperdine graduation ceremony. This was the beginning of a sudden influx of injured and emaciated Brown Pelicans to our two California wildlife centers. One particular young female pelican quickly stole the hearts of our staff and volunteers alike. She was found in a backyard pond attempting to feed on koi fish. Weighing in at just 2480g (~5.5lbs) on arrival, she was by far the smallest pelican that came into care. When she was finally strong enough to move to an outdoor enclosure, she spent all day standing right next to the American White Pelican in care, further accentuating her small size. On June 13th, after gaining over 1000g (2.2lbs), this beautiful little pelican was released back to the wild, to the delight of media and public spectators.

In a Bird Rescue first, this baby Belted Kingfisher was raised from a hatchling to release! Having never cared for such a young kingfisher before, our staff had to constantly learn and innovate in order to provide for this unique patient’s needs. A special “burrow” was created using towels to mimic this little one’s natural nest, and volunteers and staff had to disguise themselves as adult Belted Kingfishers at feeding time to prevent the young kingfisher from becoming attached to humans. All of that work paid off as the baby kingfisher grew up healthy and strong and was released after a month in our care.

Found looking bedraggled on a beach in Oregon, this adorable Brown Booby made quite the journey to get to our L.A. wildlife center. Our friends at the Oregon Coast Aquarium flew him down to us via Alaska Airlines where he was picked up at LAX by our Center Manager. Our team was delighted to care for this unique patient as he built up weight and strength. After just a couple of weeks, the booby was in great condition and ready to be released. We are so happy to have partners like the Oregon Coast Aquarium who work with us to get birds like this Brown Booby the care they need in the place where they need it.

This young Green Heron exemplifies the good that can happen when just one person takes action. A concerned member of the public found this little heron after it had fallen into a pond. Too young to get out on its own, the bird would have drowned had this gentleman not intervened. He gathered it up and kept the heron safe and warm in proper housing until he was able to bring it to our wildlife center. The little Green Heron was able to grow up alongside several other orphaned herons and egrets and was successfully release back to the wild at the end of September. Every bird that comes into care has a rescuer behind them, and we are so grateful to the individuals who jump into action on behalf of wildlife to get them the help that they need.