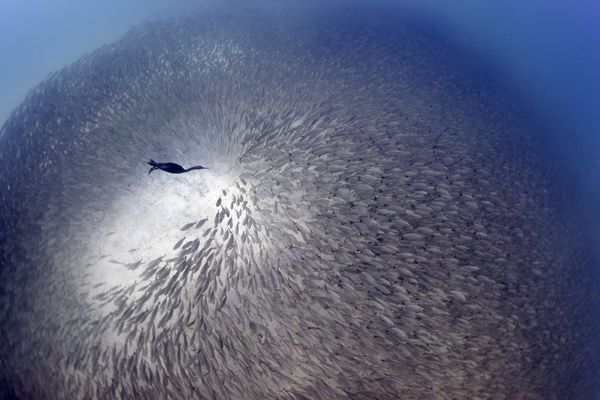 —A haunting shot of a Pelagic Cormorant fishing off the coast of Baja California wins National Geographic’s inaugural World Bird Photo Contest. “It’s strange that in a bird-photography contest the winner is one where the bird is 2, maybe 3, percent of the picture, but … it’s as artistic as any picture can be,” Josep del Hoyo, a judge in the competition, remarked of the winning photograph by Cristobal Serrano (photo above; see more photos here). [National Geographic]

—The wildlife trade monitoring network Traffic reports on exotic bird “laundering” in the Solomon Islands, where an estimated 54,000 birds, many of them endangered, were exported from the country between 2000 and 2010. Officials are skeptical of claims that the birds exported originated in captive breeding facilities: “Declaring exported birds as being captive-bred has all the hallmarks of a scam to get around international trade regulations,” said Chris Shepherd, Traffic’s deputy director for Southeast Asia.” [BBC News]

—Migratory duck populations have reached an all-time high, according to a U.S. Fish and Wildlife survey released last week. Officials reported an estimated 48.6 million breeding ducks in the U.S. and Canada, a 7% year-over-year increase and a 43% increase over the historical average dating back to 1955. [San Jose Mercury News]

—Downtown Oklahoma City faces an influx of migrating Purple Martins, and officials contend that abatement efforts to keep them out of the area are in line with the Migratory Bird Act. [The Oklahoman]

—Biologists in Brazil cite natural causes in the deaths of 745 penguins found along the Sao Paulo coast. [CNN]

—In the UK, a “one-in-a-million” white house sparrow: This fledgling has leucism, a condition marked by reduction in skin pigmentation. [STV]

—Environmental groups sue the state of Oregon, claiming that approved logging has imperiled the Marbled Murrelet in violation of the Endangered Species Act. [Audobon Magazine]