This past weekend, we heard there’s been a large oil spill along the coastline of Israel. Perhaps not as large as some other oil spills we’ve responded to in the last 50 years, but when your coastline is only 120 miles long and 105 of those miles have been oiled, you might call that large too. The Israeli Government has been organizing volunteers and now deploying their military forces to help clean up tar balls on the beach. Bird Rescue does not know the cause of the spill at this time.

Israel is reporting at least one whale that has died, as well as sea turtles and fish being impacted. Which species are impacted in a marine oil spill can vary greatly and the type of petroleum product varies too. Often after a marine oil spill, we see more aquatic birds being oiled than other species but if we’ve learned one thing from responding to more than 230 spills over the last 50 years, it’s that every oil spill is unique. Sometimes, aquatic birds take the biggest hit, other times, it may be species that are unlikely to be captured easily, such as whales. Petroleum products contain compounds known to be carcinogenic to humans and animals and some products are highly noxious.

There hasn’t been a lot of coverage of this spill in the media, so we can only guess what’s happening in Israel. What we know from our own experience is that oil spills can be chaotic! Even when you have well-written and practiced contingency plans and experienced responders, those first hours after a spill are critical. Things move quickly as personnel are deployed, equipment is mobilized, objectives are set and operational plans are made. In the case of oiled wildlife, we know every hour is critical but at the same time, steps must be taken to ensure personnel have protective equipment, understand the risks involved, are trained to capture particular species and have the means to get to and from the designated spill area either by land, air or sea. This is why oil spill contingency plans are important as well as practicing those plans in table top exercises and oil spill drills.

The welfare of wildlife is our first concern. International Bird Rescue has offered our support, and our experienced specialized response team, if needed. With global capabilities and experience on 5 different continents, we’re poised to respond to any spill no matter where it is in the world. Where we have not been invited, we stand ready to share our knowledge and expertise for the benefit of waterbirds in crisis around the world. 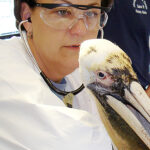 Barbara Calahan is Response Services Director at Bird Rescue. She is an internationally-experienced and recognized emergency response and management professional who has held the position of Bird Unit Deputy Leader in the Deepwater Horizon Oil Spill in the Gulf of Mexico in 2010; the Incident Command Wildlife Coordinator for the Rena Spill in New Zealand in 2011. Barbara has been the on-scene coordinator in numerous other national and international spill events.