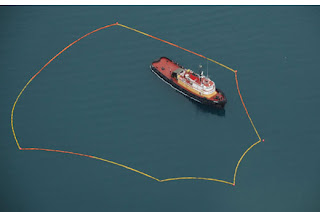 An IBRRC Response Team was released from alert on Christmas day after a diesel fuel spill dispersed in heavy Alaska seas.

The response crew was on standby after a tugboat struck the infamous Bligh Reef last Wednesday and dumped diesel into Prince William Sound. Initial news reports claimed it spilled up to 33,000 gallons of fuel.

By the weekend, high seas and 25 knot winds helped disperse the diesel after the 136-foot “Pathfinder” tugboat ran aground on the the reef that was the scene of the catastrophic Exxon Valdez spill in 1989.

The tugboat had just finished checking for dangerous ice in shipping lanes and was heading back to port in Valdez when it hit Bligh Reef. The December 23rd collision tore open two fuel tanks.

After limping off the reef toward Busby Island, the boat was surrounded by floating booms, crews pumped out the remaining fuel before towing it back to Valdez, Alaska for repairs.

Diesel fuel a very light fuel compared with the heavy black crude that spilled from the Exxon Valdez. During that spill 11 million gallons of crude stained beaches and inlets over a 1200 mile area. The tugboat is part of the Ship Escort Response Vessel System that was created after the Exxon spill.