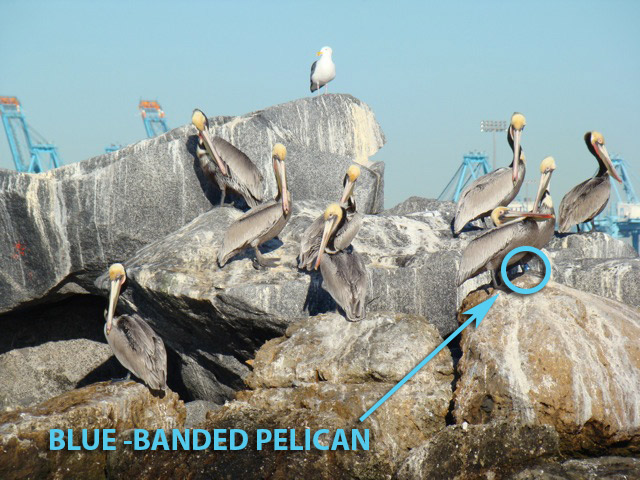 In last week’s clue for our current Blue-Banded Pelican Sighting Contest, we talked about pelicans that hang out at fish-processing stations, fishing docks and other local spots. Other good places to see banded pelicans are breakwaters. These are actually roosting areas — safe from predators and people, a place where pelicans and other birds can sleep and just hang out.

Getting to them is not always easy, of course — sometimes it takes a boat to do so. Last February, we had a friend take us out to the long breakwaters that protect the Los Angeles Harbor. There, we saw about 2,000 pelicans in a single morning, and counted nine blue-banded birds and about eight others that were federally banded (metal bands), but we could not read those bands due to the rocking of the boat. The metal-banded birds were likely International Bird Rescue’s rehabbed birds.

One of the frustrations in spotting Blue-Banded Pelicans is that sometimes the birds are lying down and you cannot see their legs. It’s illegal to disturb them — and 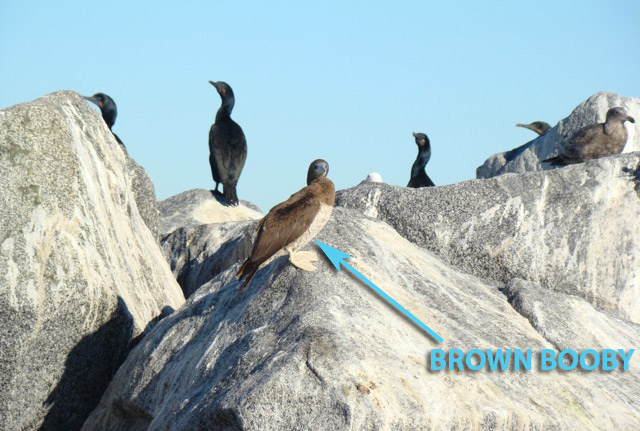 we never would — but there may be more banded birds out there than we thought.

If you have the time, patience pays off: While we were watching some potential banded pelicans move about, we spotted a Brown Booby — a rare and exciting sighting.

Some breakwaters are close enough to shore where you can actually get a good view of banded birds. For example, the photo below of C84 was taken earlier this week in Monterey, Calif. C84 came to our LA center on 1/21/10, and was an adult bird that was thin and weak, basically starving for unknown reasons. We had a bunch of adults that year that were starving adults, and most had to be washed due to a mysterious substance on their feathers that we never did identify.

Want to know more about this sighting contest? Check out the rules here. You can report your sighting via our online system.

Good luck! Over 30 banded pelicans have been encountered and reported in the last two weeks! 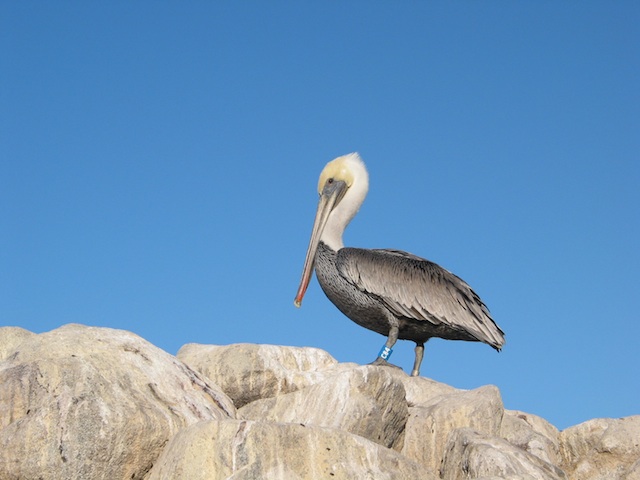