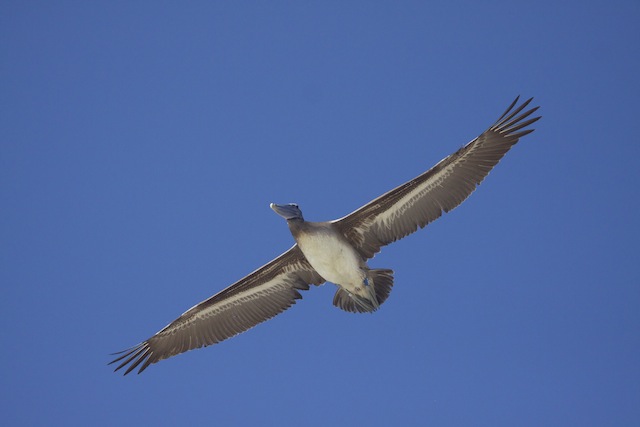 When people report banded pelican sightings, they often photograph them and generously share these images with us. There’s nothing like watching pelicans soar through the air, whether high above in formation or with the tips of their wings nearly touching the waves. Looking like gentle and graceful dinosaurs, they’re mesmerizing to watch. We wanted to share a few of these recent images with you along with their stories. Enjoy! 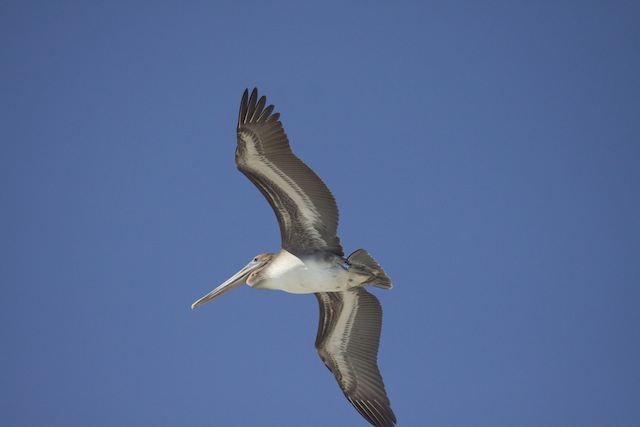 On July 28, 2012, Michael Ayers was visiting San Francisco and spent some time at the famous Cliff House, adjacent to the equally famous Bird Rock — a roosting spot for many seabirds and sea lions. Michael noticed some pelicans flying overhead, one with a blue band, and snapped some photos (see above). When he returned home and looked at his images, he saw two blue-banded juvenile pelicans. They were M87 and M91, and both had just been released hours earlier at Ft. Baker on the north side of the Golden Gate Bridge – about five miles as the pelican flies from where the pictures were taken. Both of these birds came into our San Francisco Bay Area rehabilitation center on July 5 and were thin and weak, something we see often with these young birds trying to make it in their first year of life. 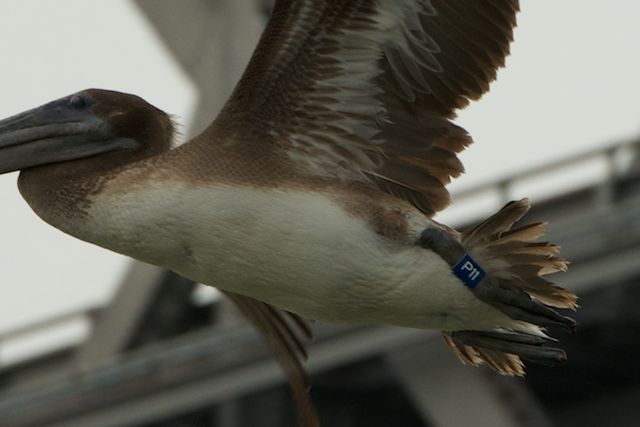 On December 5, 2012, Kristin McCleery, who by boat looks for changes in bird activity around the San Francisco Bay Bridge, noticed that one of the Brown Pelicans flying by had a blue band on, and took a few photographs as well. That bird was P11, a first-year pelican that came into our San Francisco Bay Area center on November 5 with a few injuries and in generally poor shape. It was rehabilitated and released on November 19 at Ft. Baker. Check out this close-up of a healthy-looking P11 flying by Kristin, 17 days after its release. 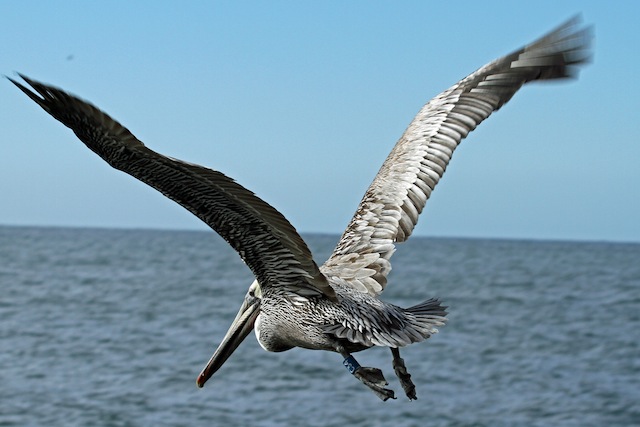 Meanwhile, in Southern California C34 is a beautiful adult Brown Pelican and one of our most famous birds. This bird came to our Los Angeles center on October 13, 2009 with fishing tackle injuries. It was rehabilitated and released in San Pedro on November 6, 2009 and spends most of its time at the Redondo Beach Pier where it hangs out and gets fed fish scraps. It has been reported over 25 times to us since its release. This image of the bird flying over the water was taken last month by Bill Steinkamp, one of our volunteer photographers. We strongly discourage the feeding of pelicans or any wildlife, as it habituates them to humans and makes them more vulnerable to fishing tackle injuries. C34 is very capable of caring for itself but it loves the fish scraps from fishermen. 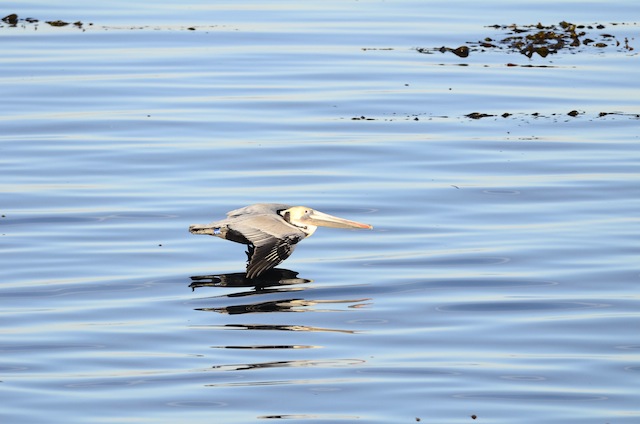 Pelican T77 came into our Los Angeles center weak and thin on November 25, 2012. We regularly get these skinny and weak adult pelicans, and even though we test them for many possible problems, we sometimes cannot really detect what is wrong with them. We rehydrate and feed them and get them back to a healthy state, and once they pass their release evaluation, they are returned to the wild. After over a month of care at our center, T77 was released on December 31, 2012 in San Pedro. Last week, 21 days after its release, this photograph was taken of T77 from the deck of the Monterey Bay Aquarium by Byron Chin. Our data indicate that many of our birds move quickly up and down the coastline, and within days of release they can be hundreds of miles away from where they were released.

Have you seen a Blue-Banded Pelican? You can report your sighting here. We’d love to hear from you.