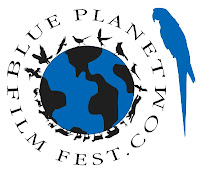 This weekend, the Blue Planet Film Festival kicks off in Santa Monica, CA. The festival includes a host of “Cool Shorts for a Hot Planet.” If you’re in Southern California for Labor Day weekend, check it out. Info here

One of the films of interest is Karearea: The Pine Falcon, about the New Zealand Falcon. The film follows the wild population of falcons that have managed to survive in the fierce commercial forestry loging. It also tells the story of two friends conservationist and director Sandy Crichton and 88 year-old wildlife photographer George Chance. Facing ill health and going blind, Chance connects with Crichton who gets ever closer to a remarkable wild population of falcons as he attempts to realize George’s dream by adding movement to his photographs.

On Thursday evening, September 3 at 7 PM IBRRC will be presenting their Wildlife Champion Award to Fox Studios for their exemplary rescue of a duck family. The Gala opening night also includes previews of the films and great socialising opportunities. Info about the opening night: http://blueplanetfilmfest.inticketing.com/events2/45932/Opening-Night-Gala