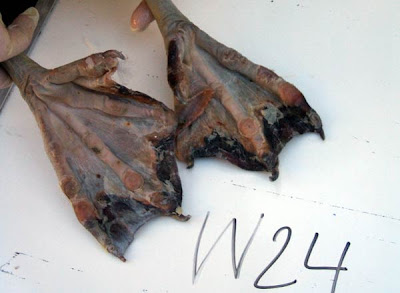 I would like to provide you with an overview of what we know about the recent California Brown Pelican event that began in mid-December 2008 and slowed down in the last week or so.

I wish we were able to point to a single “smoking gun” but we are not. Instead I will provide you with what we know and what we don’t know and, like us, let you make your own decisions. One thing is for sure, this was an unusual event and there remain unanswered questions that we will pursue throughout the following months. 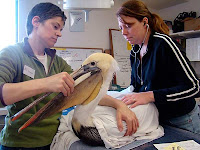 IBRRC received about 200 California Brown Pelicans between our two rehabilitation centers in San Pedro (Southern California) and Fairfield/Cordelia (Northern California) centers. Approximately 60 of them are still in rehabilitation and we have released over 75 already. We will provide the mortality and released numbers for a later date when all the birds are gone. Approximately 75% of these birds were what we call mature birds. That means that they are at least 3 years of age. This is when they get their “adult” plumage. The rest are a mixture of juvenile birds. Over 500 reportings of sick, dying and disoriented birds have been logged also. 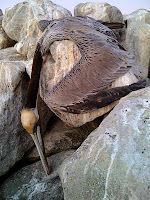 When we began to get calls about brown pelicans in distress in mid-December we noticed a few things that we had not experienced in all the years we have been rehabilitating brown pelicans:

1) Most of the birds reported were adults. It is not that unusual for IBRRC to see confused and inexperienced juveniles sometimes do silly things like land on roads etc. but typically not experienced and “proven” adults.

2) Many were acting disoriented, landing on highways, roads, airport runways, in yards, many miles inland, in higher altitudes and hiding under piers and in corners of coastal parking lots. When we usually get sick or injured brown pelicans they are most often found on beaches or near the water somewhere like fishing docks etc. and their problems are often visual like injuries or dehydrated appearance. So, their sporadic behavior in this event clued us in to something unusual happening.

3) Many of them were thin and in a weakened state.

4) We had never had a situation like this in mid-winter with brown pelicans.

5) Many had what appeared to be frost bite on their feet. (see pictures)

These were the clues that encouraged us to take action, contact the renowned pelican biologists; the media and our colleagues who could help provide some insight to why this occurred. We sent blood samples from some of the Southern California pelicans to the Dave Caron Lab at the Department of Biological Sciences, University of Southern California. We also send bodies of freshly diseased pelicans to the California Department of Fish & Game and The USGS National Wildlife Health Center in Madison, Wisconsin.

Here is what we know so far:

1) The pelicans were negative for avian influenza.

2) The pelicans were negative for West Nile virus.

3) They did not have significant bacterial growth and no virus was evident. That would rule out anything that could be considered infectious at this time.

4) The necrotic tissue on feet and pouches is likely due to frostbite and not viral or bacterial in nature. These problems are most likely a result of a large number of birds getting caught in the cold snap that hit Oregon and Washington around Christmas.

5) Some of the birds in San Pedro did show low levels of domoic acid. From Dave Caron’s email, “we’ve now looked at samples from a total of 18 brown pelicans. Four were positive for domoic acid, but not at levels that we have seen during previous years during very toxic DA events in local waters. Our data continue to support our previous conjecture that domoic acid is playing a secondary, not primary, role in the present brown pelican mortality event.”

6) So far, histology to look for chronic domoic acid lesions have not shown anything unusual or evident.

7) If we get the birds in time they respond well to immediate fluid and nutritional therapy and as pelicans usually do in rehab, they eat well and gain their weight back.

So, some answers but still no smoking gun. There has been a lot of conjecture on what this is ultimately all about. We do know that California Brown Pelicans will travel north throughout California, Oregon, Washington and British Columbia in the summer months and usually begin to head back south in large numbers in October. This year an estimated 4,000 or so brown pelicans stayed in Oregon and Washington until December when the very cold snap came. The weather changed drastically and quickly and, although not proven, is likely what caused the frostbite that we saw in a number of birds. This has occurred on the east coast in the past and birds have suffered similar problems with their feet and pouch.

They began moving south in large numbers very quickly and it’s likely that a mixture of cold weather, the physical stress of an immediate weather induced migration and possibly the reduction of fish due to water temperature changes could have all contributed to this event.

This still does not explain the disoriented behavior of many of these birds and that leads us to believe that there may be something else going on that we don’t know. As I said before, we are still looking at the situation more in depth and will report if and when we find any answers.

However, the question remains: Why did so many birds stay north longer than usual and why did the weather change so drastically, so quickly? Given the reports around the world of dramatic and unusual climate changes it is not inappropriate to connect this phenomenon to climate change but again, the science to support that hypothesis 100% is still not in so, again, its just a theory.

Our deepest gratitude to everyone who supported IBRRC’s efforts to care for these birds and our colleagues who helped capture, transport birds and those provided their medical and scientific expertise in an attempt to gain some answers.