Skip to content
Home | Blog | Call to Action: State of the Birds & our environment 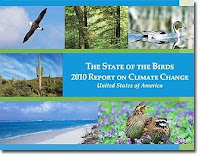 The newest State of the Birds report is out and the news is not good. The 2010 Report concludes that accelerated climate change continues to alter the natural world as we know it, diminishing the quality of our environment and leaving a lasting impact on many bird species.

The new report was released this week by United States Secretary of the Interior Ken Salazar.

“Just as they did in 1962 when Rachel Carson published Silent Spring, our migratory birds are sending us a message about the health of our planet,” Salazar said. “That is why–for the first time ever–the Department of the Interior has deployed a coordinated strategy to plan for and respond to the impacts of climate change on the resources we manage.”

Key findings from the “State of the Birds” climate change report include:

• Oceanic birds are among the most vulnerable species because they don’t raise many young each year; they face challenges from a rapidly changing marine ecosystem; and they nest on islands that may be flooded as sea levels rise. All 67 oceanic bird species, such as petrels and albatrosses, are among the most vulnerable birds on Earth to climate change.

• Hawaiian birds such as endangered species Puaiohi and ’Akiapōlā’au already face multiple threats and are increasingly challenged by mosquito-borne diseases and invasive species as climate change alters their native habitats.

• Birds in coastal, arctic/alpine, and grassland habitats, as well as those on Caribbean and other Pacific islands show intermediate levels of vulnerability; most birds in aridlands, wetlands, and forests show relatively low vulnerability to climate change.

• For bird species that are already of conservation concern such as the golden-cheeked warbler, whooping crane, and spectacled eider, the added vulnerability to climate change may hasten declines or prevent recovery.

• The report identified common bird species such as the American oystercatcher, common nighthawk, and northern pintail that are likely to become species of conservation concern as a result of climate change.

Read the summary of the report at http://www.stateofthebirds.org/summary

4 thoughts on “Call to Action: State of the Birds & our environment”