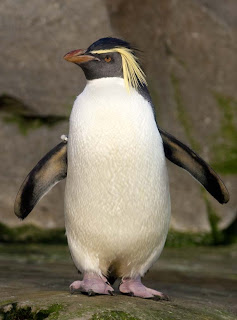 There has been a catastrophic oil spill on a remote island in the mid-South Atlantic Ocean that is threatening an entire colony of endangered Northern Rockhopper Penguins.

The MS Oliva ran aground on Nightingale Island, one of three islands of the Tristan da Cunha group, on March 16, 2011. All 22 crew were rescued before the ship broke up and leaked oil into the sea. The freighter was shipping soya beans from Rio de Janeiro to Singapore. It is said to be also carrying 1,650 tons of heavy crude oil.

Nightingale Island is regarded as one of the world’s most important wildlife habitats. The island is home to 40% of the world’s population of Northern Rockhopper Penguins (photo, above), and about 20,000 have already been confirmed oiled.

There are species of albatross, petrels and shearwaters that nest on these islands. However, all of the reports of oiled birds have been about the penguins. The likely reason for this is that many of the flighted bird species fly out to sea before landing on water, thereby avoiding the oil along the coastline. Since the penguins are not flighted, they have to swim through it to get to the islands, making them the most vulnerable and highly impacted.

IBRRC’s colleagues at The Southern African Foundation for the Conservation of Coastal Birds (SANCCOB) are leading bird rescue and rehabilitation efforts and will soon be en-route. You may remember that IBRRC has worked with SANCCOB in four different oil spills in Cape Town, South Africa. Most notably, in the Apollo Sea oil spill in 1994 we helped care for 10,000 oiled African Penguins, and during the 2000 Treasure oil spill we helped manage the rehabilitation of another 20,000.

According to the IUCN Red List of Threatened Species, the current Northern Rockhopper Penguin population in the Tristan da Cunha island group is estimated 18-27,000 at Inaccessible Island, 3,200-4,500 at Tristan. Nightingale and Middle Islands were estimated to support 125,000 pairs in the 1970s, but recent observations suggest that the main colony on Nightingale has decreased in size.

Logistics are difficult at best. An old fishing factory will be used as a rehab center. There is limited water, and no airport, so supplies are either air-dropped there or are brought by ship every few months or so. All people must arrive by ship, and it takes 4 days to get there from Cape Town, South Africa. Many of the birds have been oiled for over a week, which limits their chances of survival. The birds cannot be removed from the islands and brought to the mainland due to disease transmission concerns.

IBRRC has been in touch with SANCCOB and, along with other leading international wildlife groups, is providing support by phone as their team prepares to mobilize. SANCCOB’s team will be arriving at the islands on Sunday, March 27th, and has asked IBRRC’s trained and experienced team to be prepared to offer support. There are 300 people living on Tristan Island, and 100 of them are available to help with the penguins.

This is a truly grave situation for the Rockhopper Penguin colony and the ultimate challenge for wildlife rehabilitators. SANCCOB is the most experienced penguin rehabilitation organization in the world and we have full confidence in their ability to set up the best possible program for these birds. IBRRC’s team is coming together, and will send help when asked, and continue to support the SANCCOB team as needed. We will keep you updated as we receive information.