Skip to content
Home | Blog | Catching Up with One of Our Most Memorable Interns: Jared Harding of South Africa 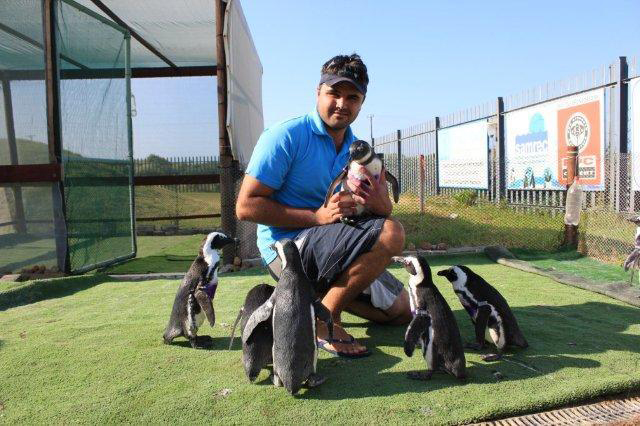 When International Bird Rescue began going out into the world to respond to oil spills, we started to meet amazing, wonderful people. Many of them wanted to know where they could go to get the training that our oil spill response team had, as those resources were not available to them. Recognizing how desperate they were for this experience, I invited anyone who wanted to learn about aquatic bird rehabilitation to visit one of our California rehabilitation facilities.

Immersing yourself in a rehabilitation setting is the only way you can learn these skills and get a sense of what is needed to do this type of work. Thus, our International Internship Program was born simply because there was a need for it. Since its official inception in 2000, we have had over 75 interns representing 14 countries. They are now part of our international response team, and many of them stay in touch with us and respond to oil spills and other emergencies with us when needed.

Jared Harding of South Africa is one of our past interns who took his internship experience and went on to help penguins and other wild animals in his country. I recently caught up with Jared and asked him to share with us what he’s been up to since his internship and how it helped him in his life:

Jay Holcomb, director of International Bird Rescue: Hi Jared, first tell us a little about yourself.

Jared Harding: I was born in Durban, South Africa, and my family relocated to Port Elizabeth in 1990.

I started my schooling career at Cape Recife High School, where my biggest challenge in life was being able to speak, as I only started speaking at the age of 4 years. My parents and I were advised that I would have to possibly learn sign language, and wow, they were wrong, as now I can’t keep quiet.

In Grade 7, I became Deputy Head Boy and was 1st Team Chess Captain (from Grade 5 in 1996 to Grade 12 in 2003). I always succeeded in school and always tried to achieve the very best. In 2002, I was awarded the highest award in Scouting, the Springbok Scout, and this was the first time in years that a scout from the Algoa Sea Scout Troop was awarded this amazing award. In 2003, I was awarded the Achiever of the Year and Matric of the Year. I also received my school colors. After my final exams in Grade 12, I received a matric with an endorsement.

The Rehabilitation Centre consists of a hospital, indoor treatment and intensive care area, hospital cages, rehabilitation enclosures and large pre-release enclosures where the animals are prepared for their return to the wild. Since the centre receives so many diverse species, it needs to remain flexible in design and function, so each species admitted undergoes a customized rehabilitation and release strategy.

Prior to Tenikwa, I was Animal Manager at the South Africa Marine Rehabilitation and Education Center (SAMREC) from 2009 to July 2012. Before that I worked for the Department of Environmental Affairs and Tourism-Marine and Coastal Management from 2008 to 2009. I’ve also worked for Ajubatus Marine Rescue-Penguins Eastern Cape and the Animal Welfare Society-Port Elizabeth.

What brought you to International Bird Rescue and wildlife rehabilitation?

I heard about International Bird Rescue and I knew then that I should apply, and wow, I was accepted. It was the best experience ever.

What were the months and year that you did your internship with us?

August through October of 2004.

What did you learn or take away from your internship experience?

I learned a lot about wildlife rehabilitation, and this has opened so many doors for me, but I wish that I could go back to International Bird Rescue because the staff at the Fairfield facility is amazing.

How did the internship and the skills and knowledge you gained with us help you in your career or life?

What would be an example of new skills that you learned with us?

What was the most challenging part of your internship?

Being able to wash oiled cormorants, as they are such a stressful animal. 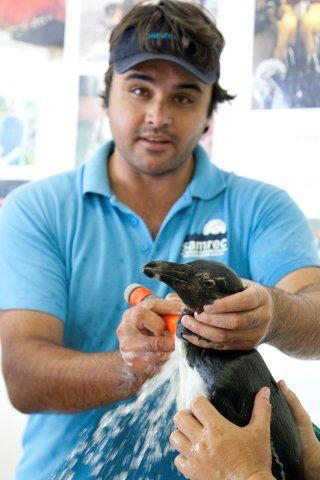 Which species did you learn about and work with, and which were your favorite or most challenging?

Anything else you want to share about your experience or the people you worked with at International Bird Rescue?

The staff are amazing and I loved every moment of my internship, I wish I could come back…

Has there been a specific patient whose story especially touched you?

Yes, we admitted a Canada Goose for a certain reason, but unfortunately we found him drowned the following morning in one of the heated warm-water pools in the main hospital area. But when [SF Bay Area center manager] Michelle and I were checking on all the other patients, we then came back to pick up the dead bird, and it moved. Wow, Michelle and I ran to the lab to get oxygen and we brought him back to life. We named him Lazarus.

What do you think is the most valuable aspect of Bird Rescue’s  internship program?

That I was able to attend an Oiled Wildlife Care Network advanced oiled wildlife course. My dream is still to be able to assist with an international oil spill.

Have you responded to any spills with us?

I have not responded to any spills, but I wish one day I will be able to…. THIS IS MY DREAM.

We welcome people from all countries to come and learn at one of our rehabilitation programs. For information on our International Internship Program, visit www.bird-rescue.org/get-involved/internships-employment.aspx