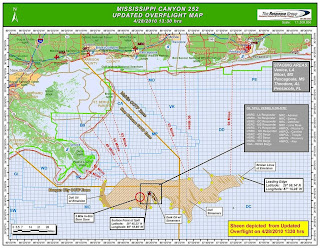 The news doesn’t get any better for the Gulf of Mexico oil spill. The U.S. Coast Guard says its five times larger than previous estimates. The leak is now spilling 5,000 barrels — or 210,000 gallons — of crude oil a day, not a 1,000 barrels that was originally reported.

During a Wednesday night press conference, Coast Guard Rear Admiral Mary Landry confirmed that a third leak on the sunken drilling rig had been discovered. The oil platform exploded and sank in the Gulf on April 20 about 50 miles off the Louisiana coast.

The threat of a massive environmental disaster is becoming a very real concern. The oil, from a well nearly a mile underwater, could enter the fragile estuaries and marshes of southern Louisiana by Friday afternoon. If it hits Mississippi, it will likely do so over the weekend. (Click on map, above, to see area affected)

Bird species at risk along the fragile gulf coast include Louisiana’s state bird, the brown pelican. Their breeding season has just started.

According to reports from the National Audubon Society, “Important Bird Areas” or IBAs that could be threatened by the slick include, Chandeleur Islands IBA and Gulf Islands National Seashore IBA in Louisiana and Mississippi; also in Louisiana, the Delta National Wildlife Refuge and Pass-a-Loutre Wildlife Management Area.

Meanwhile engineers continue to work feverishly the cap the well but have been unable to stem the underwater gush of oil. The drilling rig, Deepwater Horizon, exploded nine days ago and sank in 5,000 feet of water. More than 100 workers scrambled off the burning rig in lifeboats. 11 workers are missing and presumed dead.

News reports say that up to 4 million gallons of oil may end up in gulf waters from the BP leased well. The Exxon Valdez spill, the nation’s worst, spilled 11 million gallons in Alaska waters in 1989.

The Coast Guard and other agencies have setup a Deepwater Horizon Response web site: http://www.deepwaterhorizonresponse.com/go/site/2931/ The site has maps (above), command center reports and photos.