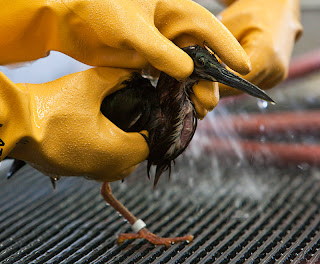 On Tuesday we received an oiled northern gannet from the Grande Isle area to the west and an oiled laughing gull from one of the offshore islands. Unfortunately the gannet died overnight but the gull is doing well as it is lightly oiled.

We continue to send out our search and collection teams in search of oiled birds. They attempted capture on a few oiled brown pelicans yesterday but the birds were flighted and strong.

Here are the latest bird numbers:

(one of the live gannets died)

Thanks again for your continued interest in our efforts,
– Jay Holcomb, IBRRC

International Bird Rescue is working with the main responder, Tri-State Bird Rescue of Delaware. IBRRC has 16 response team members on the ground including veterinarians, wildlife rehabilitation managers and facilities and capture specialists.

Tri-State Bird Rescue and International Bird Rescue have responded to a combined total of 400 oil spills. The groups worked together in the Venice Louisiana area to care for
over 200 baby pelicans after crude oil from a broken pipeline was strewn over one of the islands in the Breton Island Refuge during a tropical storm in 2005. They also partnered on a South Africa rescue effort in which 20,000 endangered African Penguins were oiled in 2000.

The oil spill involves a ruptured drilling platform approximately 50 miles off the Louisiana coast. The drilling rig, the Deepwater Horizon, exploded on April 20, 2010 and sank in 5,000 feet of water. More than 100 workers scrambled off the burning rig in lifeboats. 11 workers perished in the disaster.

The ocean floor crude rupture is now gushing at least 5,000 barrels — or 210,000 gallons — of oil a day. While engineers continue to work feverishly to cap the well, the oil slick is now approaching 4,000 square miles. Booms protecting nearby islands and beaches and chemical dispersants have kept much of the oil from reaching gulf shores. Shifting winds are expected to move more oil toward shore this week.

More on the Oil Spill: