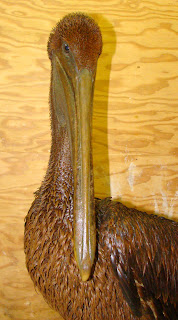 The daily update from Thursday, May 13, of oiled wildlife care at the Gulf Oil Spill follows:

Yesterday we received one heavily oiled Brown Pelican at our Ft. Jackson Oiled Wildlife Center that was found near Grande Isle, Louisiana. We are expanding our capture efforts west towards that area.

Most of the capture team in the Louisiana was grounded for good part of the day due to high winds. Bird search & capture efforts continued in the Mississippi, Alabama areas.

We will keep you updated on any new developments.

International Bird Rescue is working with the main responder, Tri-State Bird Rescue of Delaware. IBRRC has 16 response team members on the ground including veterinarians, wildlife rehabilitation managers and facilities and capture specialists.