After a very small break this weekend in Louisiana, Jay Holcomb is back with his daily updates from the BP Deepwater Horizon Gulf Oil Spill response:

Louisiana – On Saturday we had a visit from Ken Salazar, the Secretary of the U.S. Department of the Interior. Rebecca Dunne from Tri-State Bird Rescue and I gave him a tour through the Fort Jackson Center and allowed him to get a close up view of our team washing the latest oiled Brown Pelican that we received. The female pelican is a two year old that is a very sweet bird found in Grand Isle to the west of us. She is now outside with the other pelican and doing well, both are eating a lot of fish.

For the last two days our capture teams in Louisiana were mostly grounded due to intense thunderstorms and lightning strikes on the water. Not safe! We took this time to check out land based pelican and tern roosting areas but no oiled birds were spotted. 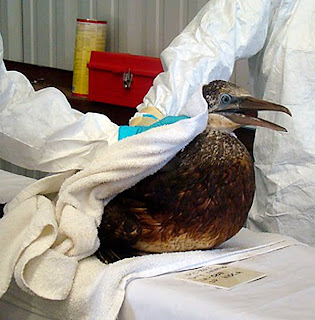 The reports we are getting now are about birds out in the deep water oiled areas and on some of the islands but you have to have safe access to those areas. We are wading through politics and weather to get to those places to assess and capture oiled birds.

Yesterday afternoon we did receive an oiled Gannet that was luckily plucked out of the water by a fishing boat that was coming back to the harbor. Its an adult Northern Gannet, heavily oiled and will be washed today. (Photo, above, oiled Northern Gannet)

Alabama – Our oiled bird rehabilitation center in Alabama received 7 sick non-oiled, lethargic brown pelicans and 1 laughing gull from that area. They were discovered soon after a fish die off in the area and there are concerns that they may have botulism and it may be connected to the fish die off. 5 pelicans and the gull are still alive and they are temporarily being cared for at that facility until plans for their transfer to a rehab facility are completed.

Mississippi – Our center in Gulfport received an oiled Gannet on Saturday and it is doing well. The bird will be washed soon. The center development and problem solving is coming along well.

Florida – Our center in Pensacola received an oiled gannet on Saturday also and it is doing well. The bird will also be washed soon.

Back at Home at our California Bird Rescue centers– It has taken a few weeks for us to get the wildlife centers on line here in the Gulf states and get a handle on this program and to understand and infiltrate ourselves into how its all working in this spill. In the mean time our centers at the Los Angeles and San Francisco areas are in spring mode and getting busier by the day. In that sense this spill could not have come at a worse time.

In order to support our staff and volunteers back at home in Cordelia (Northern California) and San Pedro (Southern California) we are hiring on extra summer help at both centers to make sure that the clinics are supported and run as smoothly as possible.

Also, we will probably be shifting our main clinic rehabilitation staff out to give each of them opportunities to work in the Gulf. We will be evaluating and are developing this plan daily as things progress here in the Gulf and we gain a better idea as to how long we may be staying. I will post more on how we are managing the spill, the centers back home as I have something to more to report.

Thanks for your continued support and words of encouragement,

International Bird Rescue is working with the main responder, Tri-State Bird Rescue of Delaware. IBRRC has about 20 response team members on the ground including veterinarians, wildlife rehabilitation managers and facilities and capture specialists.