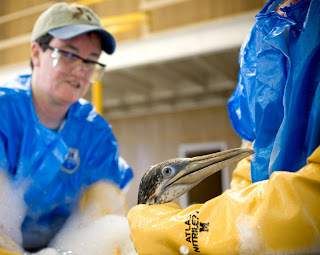 Holcomb is heading the organization’s Gulf spill response team. He has responded to over 200 oil spills around the world, including Exxon Valdez and the 1979 Gulf spill. With him are a veterinarian, rehabilitation manager and capture specialist.

In Fort Jackson today we washed the juvenile northern gannet found by one of the clean-up boats. It actually swam up to the boat so was really very lucky to survive. Its condition is stable and it will be going outside in a small pen with a pool tomorrow.

The first big press visit took place today with over 50 members of the media showing up. The International Bird Rescue and Tri-State Bird Rescue staff had decoys and demonstrated how bird-washing techniques. The media also got to see the Gannet being tube-fed. 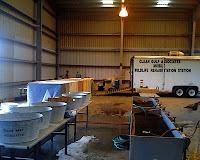 We are in the process of getting more supplies and getting geared up. The shipment of Dawn arrived this morning from P & G. The center in Theodore, Alabama is also being set-up by Julie Skoglund and Duane Titus from IBRRC and Sarah Tagmire from Tri-State. We are also beginning to set-up centers in Mississippi and Florida in preparation for the potential of oil moving in that direction. (Photo above: Getting Fort Jackson rescue center setup)

The weather has been really windy and the water is choppy so crews haven’t been able to get out on boats to search for animals. Tomorrow there is an 80 percent chance of thundershowers so this might not be able to happen for a day or say.

Right now, preparation is still the name of the game. We will keep you posted.

Background
A Team of California bird rescue specialists from International Bird Rescue Research Center (IBRRC) are on site in Louisiana and Alabama preparing bird rescue centers to clean up seabirds caught in the Gulf coast oil spill. Working in partnership with Tri-State Bird Rescue & Research the rehabilitation facilities are in Fort Jackson, Louisiana (just north of Venice) and Theodore, Alabama.

The oil spill involves a ruptured drilling platform approximately 45 miles southeast of Venice, Louisiana. The drilling rig, Deepwater Horizon, exploded on April 20, 2010 and sank in 5,000 feet of water. More than 100 workers scrambled off the burning rig in lifeboats. 11 workers are missing and presumed dead.

Nine days later, the U.S. Coast Guard says a torrent of oil is five times larger than previous estimates. The leak is now gushing 5,000 barrels — or 210,000 gallons — of crude oil a day, not a 1,000 barrels that was originally reported. While engineers work feverishly to cap the well, some officials worry the leak could go on for months – potentially becoming a devastating spill of epic proportions.

Bird species at risk along the fragile gulf coast include Louisiana’s state bird, the brown pelican. Their breeding season has just started.