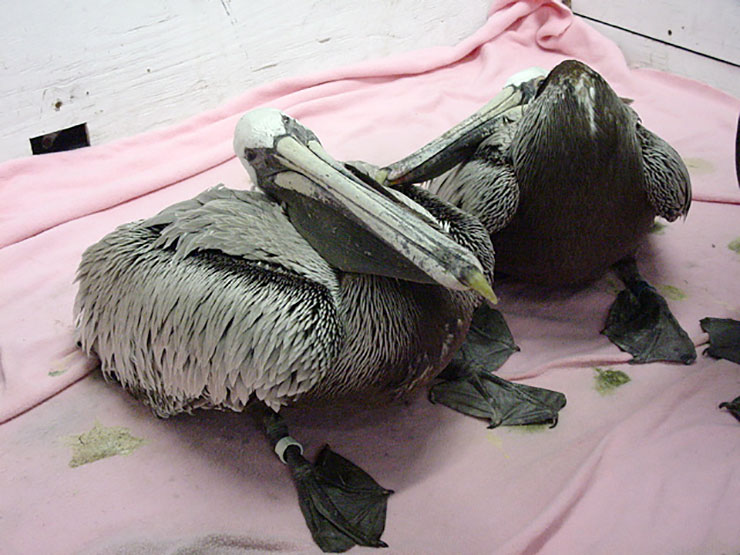 In the spring of 2007 it was particularly bad–affecting many more species of birds, pinepeds and possibly even whales. Beaches were littered with dead birds, seals, dolphins, otters, and in Santa Barbara a 29-foot long sperm whale washed ashore. The reasons for the deaths are not entirely certain, however, many of the animals tested positive for Domoic Acid poisoning.

“In my opinion, Domoic Acid is the new DDT.” –Jay Holcomb, Director of International Bird Rescue

Jay Holcomb, Director of International Bird Rescue, has many questions, but not enough answers. “I have been doing this work for 35 years and I have never seen anything like this as far as the number of species affected, other than an oil spill,” Holcomb said. “We have very serious concerns about what is happening to seabirds, and how it may affect populations, especially California brown pelicans, who are heading into breeding season. The loss of breeding adults at this time may impact the next generation as well,” Holcomb said.

Pelicans with Domoic Acid poisoning – which causes neurological distress – can have seizures while flying. Affected pelicans can literally fall from the sky. Some have crashed into car windshields or ended up in places they shouldn’t be, like airport runways and freeways. Holcomb believes many seabirds may be having seizures out at sea and drown – making it virtually impossible to count the bodies.

Although Domoic Acid is a naturally occurring toxin produced by microscopic algae, something is making recent blooms of the algae especially virulent. Bird Rescue is working closely with the Caron Laboratory at University of Southern California (USC), providing body fluids from suspect birds for analysis.  Professor Dave Caron and Assistant Research Professor Astrid Schnetzer test the waters off Southern California and alert the center when Domoic Acid is present. The staff then braces and prepares the ICU.  The only way to save the birds is to flush the toxins out of their systems, a labor intensive process.

This spring dead birds began littering beaches in March. Bird Rescue personnel that walked the beaches reported “dead birds everywhere.” Species included grebes, gulls, cormorants, American Avocets and loons. Not all test positive for DA. But other neurotoxins such as saxitoxin which can cause paralytic shellfish poisoning in humans, are also being examined by Dave Caron and Astrid Schnetzer. They are studying the birds with the help of IBR staff who provide fresh blood and body fluids of all sick birds. Long-time volunteer, Susan Kaveggia, orchestrates the sampling and has been instrumental in forging the relationship with USC.

The Marine Mammal Care Center, which is next door to Bird Rescue in San Pedro at Fort MacArthur, has been overwhelmed with sick seals and sea lions who eat the same fish as pelicans; anchovies and sardines. The fish eat the affected algae, which don’t kill them, but the animals that eat the fish get concentrated amounts, depending on how many affected fish they eat. Whether they live or die depends how much of the poison they ingest. Many of these sick animals have been tested by Caron and Schnetzer. More than half of those tested have been positive for DA over the past few days.

“In my opinion, Domoic Acid is the new DDT,” Holcomb said. “If the effects of DA poisoning are cumulative in the brain, and we don’t know that yet, it could have serious consequences on the population of California Brown Pelicans. As of this point, we just don’t know.”

How to help the pelicans 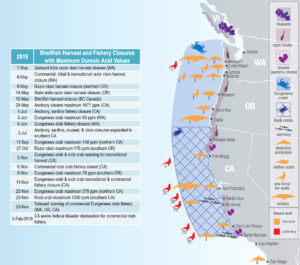