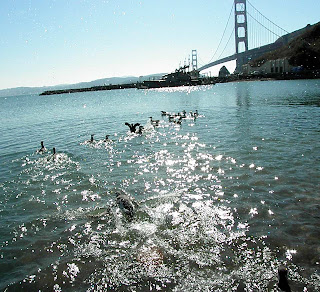 The Oregonian newspaper out of Portland, has a terrific and sad piece about the Sea Slime ’09 event that hit seabirds in the Pacific Northwest late last month.

The story is titled:
“Deadly ocean foam subsides, but more than 10,000 seabirds die”:

The deadly foam that clobbered seabirds in the Pacific Northwest has subsided and several hundred birds rescued from the slime are being released. But the death toll worries conservationists.

More than 10,000 scoters, or seaducks, were killed by the first onslaught of algal foam that hit the Olympic Peninsula in mid-September, said Julia Parrish, marine biologist and seabird specialist at the University of Washington.

That toll — mostly surf scoters and white-winged scoters — amounts to 5 percent to 7 percent of their overall numbers on the West Coast, she said.

“That is a pretty significant bite into those species,” Parrish said. “I don’t think it will knock the population back for years. But at least with surf scoters — a species that’s in decline — conservation scientists are rather concerned about it.”

Parrish estimated that thousands more seabirds, including many red-throated loons, were killed in the second wave of foam off the Long Beach Peninsula about two weeks ago.

IBRRC helped rescue 450 birds last week and 150 have been washed and released. Another bunch of cleaned birds will be released back into the wild tomorrow near the Golden Gate Bridge in San Francisco.

Photo of release by Tom Russert, in Marin County near the Golden Gate Bridge.