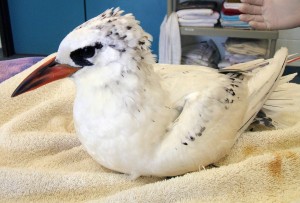 An exotic seabird that arrived in Los Angeles as a stowaway aboard a ship from Korea is taking an unusual flight home to Hawaii this week having been rehabilitated at International Bird Rescue’s Wildlife Center in Los Angeles. The Red-Tailed Tropicbird, a solitary plunge-feeding seabird which rarely fishes within sight of land and nests on offshore islands in the pacific ocean, cannot be released from the Continental US and is instead heading home by plane with a one-way ticket on a commercial flight to Hawaii. The bird will depart from LAX on Thursday for Honolulu where it will be picked up by a U.S. Fish and Wildlife Service (USFWS) agent and then immediately flown to Midway Atoll to be released back into the wild.

International Bird Rescue, which specializes in the rescue and rehabilitation of seabirds and other aquatic birds, has provided care to many other seabird stowaways in its 40-year history – primarily Laysan Albatrosses and the occasional Frigatebird. The stowaway phenomenon is generally considered to be a simple case of mistaken identity. Laysan Albatrosses looking for new nesting islands during breeding season can see the flat surface of a cargo ship as the perfect new home. They sit quietly among the cargo containers and are not discovered until the ship is unloaded. These birds are often brought to one of International Bird Rescue’s Wildlife Centers in California, where they are evaluated, and within a few days are released off of the Coast to fly back to Hawaii, Mexico, or wherever they choose. However, the Tropicbird, which does not soar long distances like an Albatross, needs a helping hand in order to return to its remote feeding and nesting grounds.

Red-tailed Tropicbirds nest throughout the southern Pacific Ocean, from the Hawaiian Islands to Western Australia as well as in the Indian Ocean. They disperse widely after breeding, and birds with numbered leg bands from Hawaii have been discovered as far away as Japan and the Philippines.

To catch their prey in the wild, mostly flying fish and squid, the Tropicbird flies high into the air and dives with wings half-folded into the water. However, in aviaries they cannot fly high enough to plunge for food, and consequently remain sitting on the water and must be force-fed. The bird has been in quarantine in its own private pool at International Bird Rescue’s Los Angeles Wildlife Center in San Pedro since September 27, and has now passed all of its required health tests and has been approved for release.

“We are very fortunate to have a specialized rescue facility and trained staff here in Los Angeles with the skills and experience to give this Tropicbird a second chance,” says Jay Holcomb, International Bird Rescue’s Director Emeritus. “We have also had great support from the U.S. Fish and Wildlife Service and the USDA, who have helped ensure swift and safe passage back home for this beautiful seabird.”

While this bird’s story is special, International Bird Rescue believes that every bird matters, and does everything it can to give each of the seabirds and aquatic birds that pass through its doors all that they need to survive and thrive. International Bird Rescue welcomes donations to help offset its expenses for not just the Tropicbird, but each of the 5,000 birds that arrive at its centers every year.