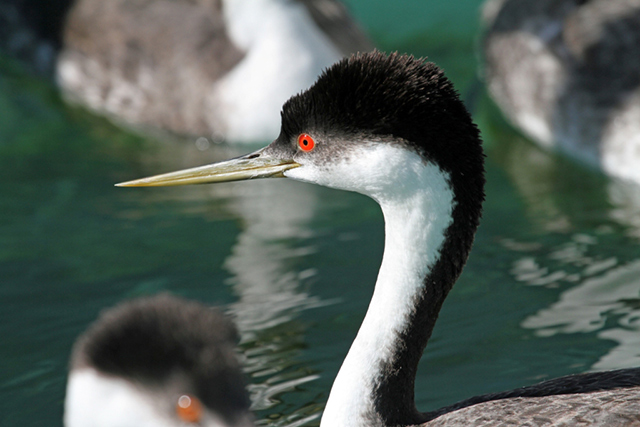 A Western Grebe at our Los Angeles center, November 2012. Photo by Bill Steinkamp.

With fall migration in full swing, large numbers of migratory birds are moving through California on their way south. These birds follow the Pacific Flyway, one of four major routes in the Americas for migratory travel that range from the Arctic to Patagonia.

As rehabilitators of migratory aquatic birds, autumn becomes a very busy time for International Bird Rescue. Migratory birds come to our centers for many reasons, but most commonly are victims of either “crash landing” or “failure to thrive,” the latter a phenomenon that impacts many young birds.

Crash-landed birds, also known as grounded birds, are birds that have hit the ground and are unable to regain flight. Grebes, loons, some species of ducks and other seabirds are the most common birds we see with this problem. For example, by our last count we more than 30 grebes — Western Grebes, Eared Grebes and Pied-billed Grebes — in our care, many with signs of crash landing.

Why do these birds crash land? Birds can easily mistake wet pavement and shallow ponds as deeper waterways and can become grounded in parking lots and streets. Grebes, for instance, are excellent swimmers, with their feet placed far back on their bodies, but they are not suited for land and require a long water “runway” to take flight. When grounded, these birds will end up dragging themselves as they try to swim. Unless captured, treated for their injuries and moved to water, they will die.

Storms and strong winds can also contribute to grounding, as gusts can knock a flying bird to the ground (we commonly receive many grounded birds after storms). Nationally, one of the worst single cases in recent years occurred last December in Southern Utah, where thousands of Eared Grebes slammed into a Wal-Mart parking lot. Wildlife officials and volunteers saved about 3,000 of these birds, according to news reports, but about 1,500 died (see video below for releases).

At our two wildlife care centers in California, we receive many types of grebes that crash-land and injure their sensitive feet. They also sometimes require treatment for deep wounds and abrasions, as well as fractured wings, legs and keels (the extension of the breastbone) when these birds hit the ground hard. Grebes are remarkable birds — some are capable of breathtaking courtship displays — so seeing them in this predicament is about as heartbreaking as it sounds.

What is failure to thrive? Failure to thrive is a term we use for a bird that is simply not surviving for non-obvious reasons. Grebes, for example, are predators that must learn to fish, and young birds are prone to starvation if they cannot find food in a challenging environment. These are typically first-year birds and come to us weak, emaciated and often with high parasite loads. Sometimes they are found grounded, though usually these birds have washed up on beaches. Unlike young pelicans, which we typically receive during the summer months, we see many young grebes in the fall as they attempt their first migration southward. 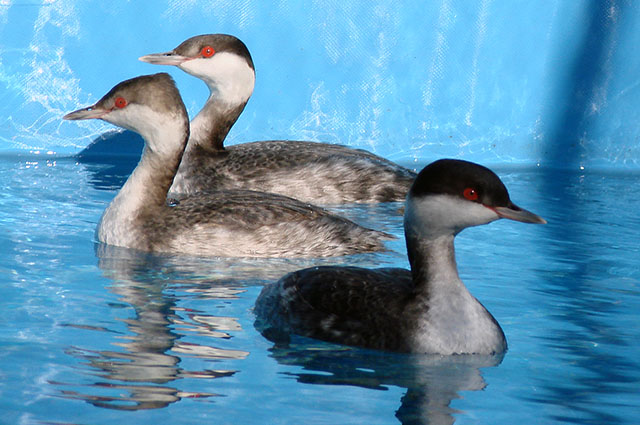 How do we care for these birds? Thin and weak grebes are given immediate supportive care at our centers. This includes IV, gavage and what’s known as subcutaneous fluid therapy, as these grebes are always dehydrated upon intake. If they improve, then the birds begin receiving nutrition and further treatment.

Other common afflictions affecting grebes include fishing tackle injury or oiling, as seen last week on our blog involving a large, male Western Grebe (photo right). This is the time of the year when we receive oiled grebes from the natural oil seeps that occur along our coast.

International Bird Rescue bands all of its rehabilitated grebes upon release. For more detailed information on our efforts with these species, click here.

We depend on your support to help care for these animals. Please consider becoming a supporter for the care and treatment of a grebe or another aquatic bird through our Adopt-a-Bird program.

Your donation can be in honor of a friend who loves birds or in memory of a loved one. There are many ways to give! 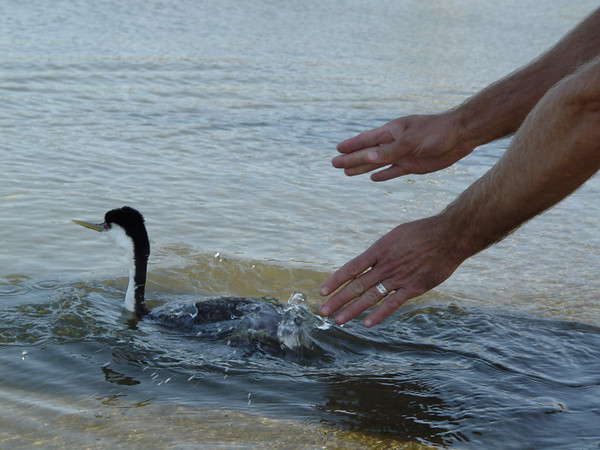