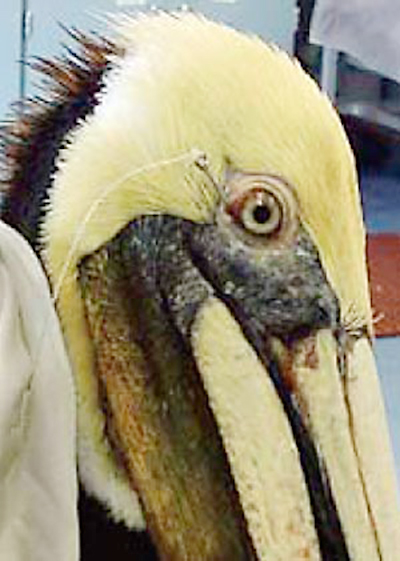 A recent study has concluded, not surprising, that pelicans suffer the most fishing line injuries. Over 30% of the animals harmed by fish hooks and entangled fishing line were Brown Pelicans.

The report was published in the Journal of Wildlife Diseases, 45(2), 2009, pp. 355–362. The report was authored by Brynie Kaplan Dau including contributors, Jay Holcomb of Bird Rescue, Kirsten V. K. Gilardi and Michael H. Ziccardi of UC Davis’ Wildlife Health Center.

The study says that pelican injuries caused by fishing gear were most common in the Monterey Bay region, where 59.6% of the pelicans rescued and admitted to a rehabilitation center were injured by fishing gear over the 6-yr period.

To reduce risk of injury and death for coastal marine wildlife and people, the SeaDoc Society, a marine ecosystem health program of the University of California Davis Wildlife Health Center, launched the California Lost Fishing Gear Recovery Project in 2005. To date, more than 11 tons of lost fishing gear have been removed from near shore marine waters surrounding the Channel Islands, and hundreds of pounds of recreational fishing gear (such as fishing line and hooks, tackle, and ropes) have been cleaned off public-access fishing piers.

To prevent the accumulation of discarded gear at these piers, mono-filament disposal stations have been established on many coastal public piers.

The paper was published in the Journal of Wildlife Diseases. Read the abstract