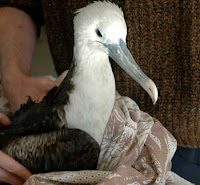 The wayward Magnificent Frigatebird that was spotted in a tree in Healdsburg, CA after being blown off course by relentless storms in January, will be released back into the wild in Southern California early this week. The male juvenile Frigatebird is in route this weekend to be set free Monday or Tuesday on the Channel Islands off the Southern California coast.

This large tropical bird which is rarely seen in Northern California has spent nearly a month at IBRRC’s Cordelia bird center gaining weight and getting some much needed R & R. It arrived at the center 400 grams underweight and below its core temperature, in critical condition. Today it is 1150 grams, strong and in good health.

This was only the second Frigatebird treated by IBRRC in its 37 year history. Frigatebirds, who are also know as “pirate birds,” usually live in warmer climates such as the Galapagos Islands area. The bird was found along the Russian River in Healdsburg on January 4, 2008 by locals, John and Dana Naber.

Several organizations and individuals participated in different phases including ID, rescue and a month long rehabilitation effort. Many thanks to all the helped along the way!

2 thoughts on “Frigatebird to be released in Southern California”