Turkey shot with arrow rescued from WildRescue on Vimeo.

Rebecca Dmytryk, founder of WildRescue and a near-20 year member of International Bird Rescue’s response team, writes this guest post on a young wild turkey shot with a target arrow (out of season, and thus illegal: a reward has since been offered for information leading to the arrest of those involved). After weeks of careful planning, the bird was captured by WildRescue’s team and treated at International Bird Rescue’s Bay Area wildlife care center by Dr. Rebecca Duerr. Here’s the story:

On August 21st, we were notified of a wild turkey with an arrow through it, in Hollister, Calif. (Read the initial blog post here.)

Capturing a flighted turkey is difficult, but one with a 30-inch projectile through its body makes for an even greater challenge. We spent the last couple of weeks orchestrating the rescue — devising a safe method of capture that would offer the greatest potential for success on the first try and coordinating with avian specialists for the bird to receive immediate care.

The landowner who first reported the bird kept us informed of the bird’s condition and habits. It visited regularly, traveling among a 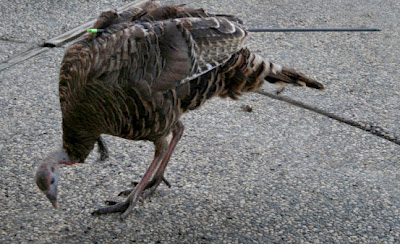 raft of other turkeys that crossed the hilltop property nearly every morning and evening.

Turkeys have incredibly sharp eyesight and are wary of even the slightest changes in their surroundings. For the capture to be successful, we needed the birds to get used to netting material, so we staged our capture equipment in advance.

The day arrived. With transporters lined up and the veterinarian on standby, our capture team assembled at the property just after sunrise. At 7:20, as Duane was finishing with the trap, the turkey was spotted heading toward the residence — traveling alone.

Everyone scrambled into position inside the house, remaining quiet and still as the bird approached cautiously. At 7:40, the injured turkey was captured!

After a quick inspection of the wound, we believed it was better to remove the projectile than cut it. Duane slowly pulled the long carbon fiber shaft from the bird’s body, and she was placed inside a transport kennel.

During the 120-mile drive from Hollister to Fairfield, the young hen bird was uncharacteristically calm. We hope this behavior was due to her age and not because she was ill. 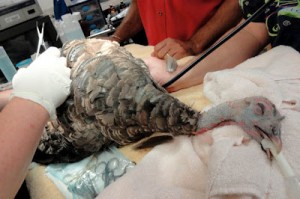 Once at International Bird Rescue, the bird was seen by avian specialist Dr. Rebecca Duerr.

By 11:30, the bird was under anesthesia. Radiographs were taken to check for fractures, and the wound was thoroughly cleaned.

By 1:00 p.m., after being observed for a while, she was headed back to Hollister to be released.

All said and done, it was an 8-hour turnaround – from the time the hen was captured, to her release! 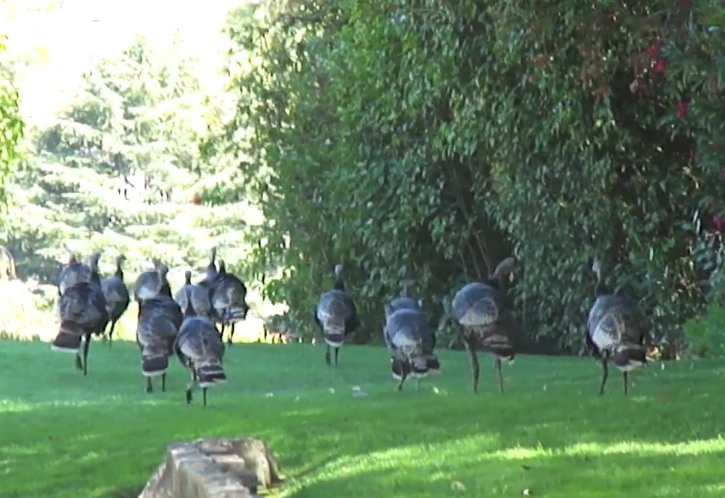