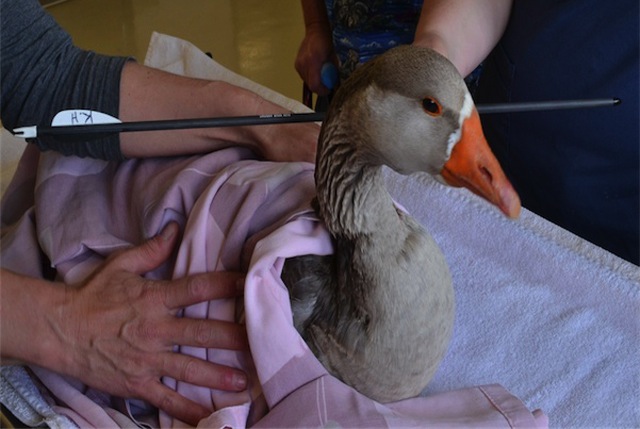 Update: An individual has stepped forward in this incident, read more at the Napa Valley Register. We are grateful for the resolution of this case and will post more updates as soon as we can. Below is the original release on the cruelty incident:

As we wrote on Wednesday, a Greylag Goose was shot with a target arrow in Napa and brought to International Bird Rescue’s San Francisco Bay center last week for surgery (the bird is now recovering).

(April 4, 2013) – The Humane Society of the United States and The Humane Society Wildlife Land Trust are offering a reward of up to $5,000 for information leading to the identification, arrest and conviction of the person or persons responsible for illegally shooting a Greylag goose with an arrow in Napa, Calif.

According to International Bird Rescue, on Wed., March 27 around 5:30 p.m., Wildlife Rescue Center of Napa County received calls about an injured Greylag goose on the Napa River between 1st St. and the Yacht Club. The goose had been shot through the neck with an arrow bearing the initials ‘K.H.’ and was taken to the International Bird Rescue’s San Francisco Bay center for surgery the following day. She is currently recovering.

“This act of wanton cruelty demands legal justice,” said Jennifer Fearing, California senior state director for The HSUS. “The Humane Society of the United States applauds the Napa County Sheriff’s Department for its efforts to find those responsible.”

Anyone with information concerning the shooting of the goose is asked to call the Napa County Sheriff’s Department at (707) 253-4451.

—Wildlife officials estimate that nationwide, tens of millions of animals are killed illegally each year.

—It is estimated that only 1 percent to 5 percent of poached animals come to the attention of law enforcement.

—Poachers injure or kill wildlife anytime, anywhere and sometimes do so in particularly cruel ways. Wildlife officials report that poachers often commit other crimes as well.

—The HSUS and HSWLT work with state and federal wildlife agencies to offer rewards of $5,000 for information leading to arrest and conviction of suspected poachers.

—The HSUS and HSWLT work to curb poaching across the county. The HSUS recently doubled its standard poaching reward from $2,500 to $5,000 thanks to a generous donation from HSUS board member Cathy Kangas and her husband Ed Kangas of New Canaan, Conn.

Media coverage: Thanks to CBS13 Sacramento and the Napa Valley Register for covering this story.

Want to help support this bird’s care and recovery? Click on birdrescue.org/donate and join our team.