We’re very pleased to announce that IBRRC’s Executive Director, Jay Holcomb, has been named the 2010 John Muir Association’s Conservationist of the Year.

The 33rd Annual John Muir Conservation Awards chooses “individuals who have excelled in environmental protection, or made significant contributions to the advancement of conservation.”

Jay is being recognized for his 25 years of passionate leadership at International Bird Rescue Research Center and most recently in leading IBRRC’S 80-person bird rescue response team at the 2010 Gulf oil spill. 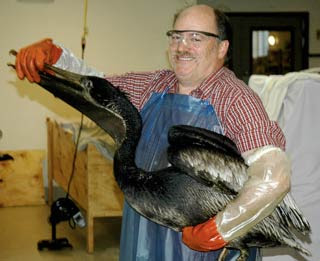 This is the second award this year for Jay who was also named Oceana’s 2010 Ocean Hero in June for his commitment to ocean conservation.

With 40 years of wildlife rehabilitation work, Jay is honored to accept this prestigious award. “It is a real honor to receive this award and, even in the remotest way, be associated with the great John Muir,” said Jay. “At International Bird Rescue we believe that every bird matters. Our focus for nearly 40 years has been on making a difference to the lives of individual animals and it is quite wonderful to see this approach being acknowledged through a prestigious conservation award such as this.”

The mission of the John Muir Association is to celebrate the life, share the vision, and preserve the legacy of John Muir through education, preservation, advocacy and stewardship, in partnership with the National Park Service at the John Muir National Historic Site in Martinez, California.

John Muir (1838-1914) was America’s most famous and influential naturalist and conservationist. He also has been called “The Father of our National Parks,” “Wilderness Prophet,” and “Citizen of the Universe.” Muir spent the last years of his life in the San Francisco Bay Area. The National Park Service purchased his home in 1964 to preserve his legacy for future generations.

Again congratulations to Jay for his tireless leadership and dedication to furthering IBRRC’s mission – saving the lives of birds threatened by oil spills, environmental changes and human interaction through rescue and education.