Skip to content
Home | Blog | In Los Angeles, an influx of oiled murres from natural seepage 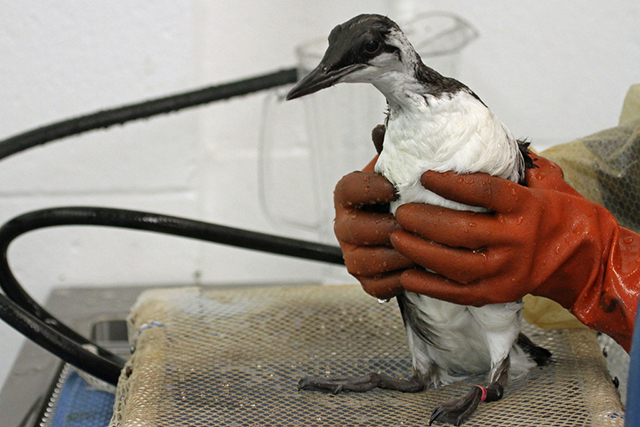 Every year between November and May, we receive an influx of oiled birds at our Los Angeles facility — this the result of natural oil seepage from the bottom of the ocean (read Tony Barboza’s 2012 report on this problem in the LA Times here).

Since November, we’ve received a trickle of oiled birds, and we were hoping this would be a light year. But last week, we began receiving them in larger numbers. Since February 1, we have received 51 oiled birds, mostly Common Murres, at our L.A. center, located in San Pedro. Yesterday, 12 of those birds were washed by staff and volunteers and are in the process of being waterproofed and rehabilitated. Others are awaiting their turn until they are stable enough to withstand the washing process.

Most of these natural-seep oiled birds are being found on beaches from Santa Barbara to Newport Beach. In the past, Western and Clark’s Grebes were the birds most commonly oiled along our coast, but that trend changed two years ago. Now, we see mostly juvenile Common Murres with a spattering of grebes and loons.