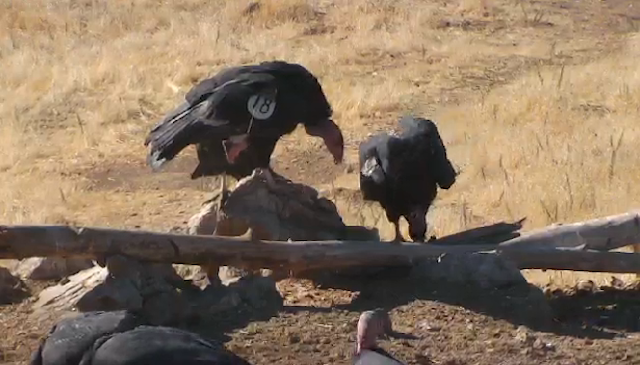 • There are more seats on a typical 747 jumbo jet than there are California Condors living today: 205 are in a captive breeding program, while 231 have been introduced into the wild through the California Condor Recovery Plan. Being the avian webcam fans that we are (check out ours here), we were excited to see a new live look this week at condors in the wild through a project launched by the Ventana Wildlife Society in a remote area of Big Sur. Via San Jose Mercury News:

Several times a week, biologists who work at the organization put out stillborn calves on the site, a 240-acre property surrounded by wilderness in the Los Padres National Forest of Monterey County. Several condors were seen Monday morning on the live camera eating and preening.

Biologists from the group will zoom in on the birds at key times, such as in the morning when they are most active, Sorenson said. They also plan to ask the public to send notifications on the Ventana Wildlife Society’s Facebook and Twitter feeds when birds are doing something interesting. [Mercury News]

• Breeding Tufted Puffins and Black Oystercatchers are among the success stories on Alaska’s Hawadax Island, once dubbed “Rat Island” for obvious reasons and the focus of a rodent eradication program spearheaded by Island Conservation, The Nature Conservancy and U.S. Fish and Wildlife Service. [Associated Press]

year. Polyisobutene, or PIB, is an oil additive that until recently could be legally discharged in restricted quantities during cleaning of a ship’s tanks or ballast water flushing, The Guardian reports. PIB was identified as the whitish slick that came ashore on beaches from Cornwall to Dorset in January and April.

“[A]t a meeting of the IMO’s working group on the Evaluation of Safety and Pollution Hazards of Chemicals in London on Tuesday, it was announced that from 2014 all high-viscosity PIBs will be reclassified under a separate category that bans their discharge at sea and requires tanks to be fully pre-washed and all residues to be disposed of at port. This will also apply to new ‘highly reactive’ forms of PIB, which are currently being transported unassessed,” the newspaper reports. [The Guardian]

• The first peer-reviewed research on the use of birdsong recordings to attract birds finds the practice could have a negative impact, at least in the short term, according to a paper published in PLOS One that studied the effects of such recordings on the vocal behavior of Plain-tailed Wrens and Rufous Antpittas in Ecuador. “Birds could be wasting their time and energy by responding to nonexistent intruders,” co-author and Princeton University postdoctoral fellow J. Berton Harris said of the use of the recordings, known as playback. “When male birds respond to birdwatchers’ playbacks to defend their territories, they may spend less time caring for their nestlings, experience higher levels of stress hormones or be subject to a romantic coup from other males while away from their mates.” [PLOSOne.org]

• Via HuffPo, a touching Q&A with Bob Barker and his extraordinary philanthropic legacy for animals in need. [Huffington Post Green]

• Top tweets of the week:

Grab your swimsuit–fast–lakes are disappearing in China, Mideast, Africa. Last one in is, well…last one in: http://t.co/lKbLMy8wRl

Patient of the week: Black Rail being cared for at our San Francisco Bay center :: http://t.co/lvuK034S7X :: pic.twitter.com/3sMX8ZWqzf