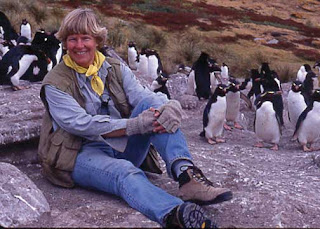 Nice piece in the New York Times Science Section this week with Dr. Dee Boersma, who has been studying Magellanic Penguins in Argentina since 1982.

She brings up a story that I hadn’t heard: A Japanese company went straight to the Argentine government in the 1980s and asked permission to collect penguins for the production of goods:

“We’d like a concession to harvest your penguins and turn them into oil, protein and gloves.” There was a public outcry. This was during a military dictatorship when dissidents were being thrown into the ocean from airplanes. And yet people said, “We object to having our penguins harvested.”

Boersma, a University of Washington conservation biologist, has been called the “Jane Goodall of penguins.” Dr. Boersma, 62, has spent 25 years studying penguins on one stretch of beach at Punto Tumbo, in southern Argentina.

As she says: “I’m a kind of census taker of the 200,000 breeding pairs of penguins at Punta Tombo. I track who is at home, who gets to mate, where the penguins go for the meals, their health, their behaviors.”

Read the rest of the story online