On January 10, 2011, I officially turned the reins of International Bird Rescue Research Center (IBRRC) over to Paul Kelway. He is now the Executive Director of IBRRC, functioning in an updated and reconstructed position that will allow him to lead the organization into the future. I am certain that he will do this very well, as he is a compassionate, intelligent and capable person. I will be working with him, the staff and our Board of Directors on a daily basis, but Paul holds the responsibility of guiding IBRRC and meeting its mission. 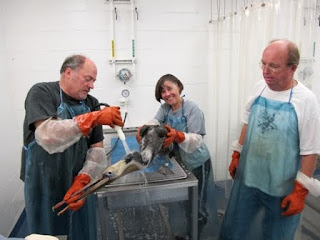 I want to share with you something that I think is important. Earlier this year I received two awards that are meaningful to the field of wildlife rehabilitation and conservation and wanted to explain to you why I think that they are significant. I was hard at work with the Deepwater Horizon Oil Spill in the Gulf of Mexico last summer when Oceana’s Ocean Hero award was given to me, so I was not in the position to say much about it. I was really honored to receive it and I love what it stands for. Then in September 2010, I also received the John Muir Conservationist of the Year award. I realized that although these awards honored me, they were actually acknowledging the message of our work, “recognizing animals and nature as important and worthy of our attention.”

I am a wildlife rehabilitator; that’s been my career and my life. All I have ever wanted to get across was the value, importance and beauty of animals, and to accept some accountability and responsibility for their welfare – especially when they are impacted by human activity. This desire was born out of watching and befriending animals as a kid, and by listening to disturbing things that people thought of them. Very early in my life, I became aware that I had a sense of purpose that I could not shake– nor did I want to – so I just lived as I was compelled to. At age 5 or so, I became aware of an intense desire to help animals but had no idea how to make it happen. I held that knowingness in my mind, knew it would happen, and basically allowed it to unfold in front of me. I spent the next 40 years or so working with companion animals and rehabilitating wild animals.

In a nutshell, that’s how it happened for me. I want everyone to know that these two awards are really a major win for wildlife rehabilitation and for the preservation of nature. I mean, I’m a coot, raccoon and gull (very common species) rehabilitator being recognized as a Hero and Conservationist of the Year in the name of the great John Muir? That in itself is extraordinary, because if you look at my achievements you will see that they are all about helping “common” individual wild animals – animals that are discarded as unimportant. I guarantee you that this is exactly how they are held in the minds of most people. If that were not true, then we would not have endangered species and massive loss of habitat. That evidence is all around us and it points to our own attitudes. Early on, I became aware of the skewed outlook that many people had about animals and nature. I have always felt that all life is equal, and the keys to the kingdom, so to speak, are held in nature and in the simplest of animals. They should be revered, protected and adored as they are the most misunderstood living things on earth, yet carry sacred knowledge that we all want and strive to understand. Who are we? What’s it all about? Just look at all of the religious figures and naturalists alike who went into nature and observed it to find the answers to all of their deepest questions and challenges.

During the Deepwater Horizon Oil Spill I was constantly asked by reporters, “Why is it important to care for these animals?” I think it’s obvious, but clearly not everyone does. Keep in mind that two highly respected environmental organizations, Oceana and the John Muir Society, just recognized a wildlife rehabilitator and his work in putting the common and simple animals on the pedestal by honoring me with these awards. That is why these awards are valid and important; they recognize a wildlife rehabilitator who has spent a great portion of his life caring for all animals, endangered to common, and sees the value in all of them.

In essence, my life has been living my message to the world; it always has been. The last 25 years have been a wild ride that took me all over the world, exposed horrible atrocities to me, and allowed me to touch and help wild animals – a privilege that I have never taken for granted. IBRRC became an avenue for me to express myself and carry on my mission. I am beyond grateful to IBRRC’s founder, Alice Berkner, for seeing something in me and bringing me on board in 1986, and for all that IBRRC has given me! You can be a great writer or painter, but without paper or canvas you are just a dreamer. My canvas has been IBRRC, and I will never forget that without it I would have been just another dreamer.

Another thing I learned from nature was to evolve myself, as nature does. I am doing that by letting go of the directorship of IBRRC, and am now the Director Emeritus and ready for whatever that brings. I don’t know how it will unfold but I think the upcoming year will bring about great opportunities for IBRRC and me. I officially close this chapter and open a new one.

That’s all for now. Power to the coots, the raccoons and the gulls . . . all the animals . . . even the starlings!