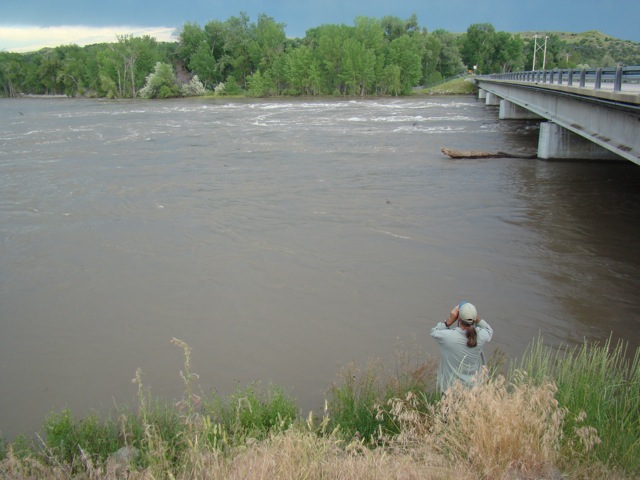 International Bird Rescue’s team has been in Billings, Montana since July 3 working on the Silvertip Pipeline Spill Incident in the Yellowstone River. We have sighted hundreds of clean and healthy Canada Geese and Mallard ducks, but no oiled birds. After talking to other professionals working on the spill, and with most of our time spent along the river, it became clear to us why we are not seeing oiled birds. Massive snowmelt has made the river a rapid and violent body of water that has wiped out the quiet inlets and slack water areas that waterfowl enjoy. Many of the area’s seasonal wild residents had already been forced to move, thereby avoiding much of the oil as it flowed down the river.

The turbulent river was so fast that it broke up the slick into streamers that eventually became smaller smudges and pieces of oil. These pieces can be seen on patches of vegetation, and as they dehydrate and become even more sticky, leaf and other debris adheres to them, helping them decompose quicker, and ultimately making them less likely to harm wildlife. On the other hand, fast-moving water also makes finding any remaining oil more difficult.

To date we have recovered one oiled baby garter snake, and it has been cleaned and released. All in all, this is not the worst spill we have been involved with, but it’s still a spill, and we will continue to monitor wildlife along the river as long as there is any risk.

3 thoughts on “Keeping Watch on the Yellowstone River”